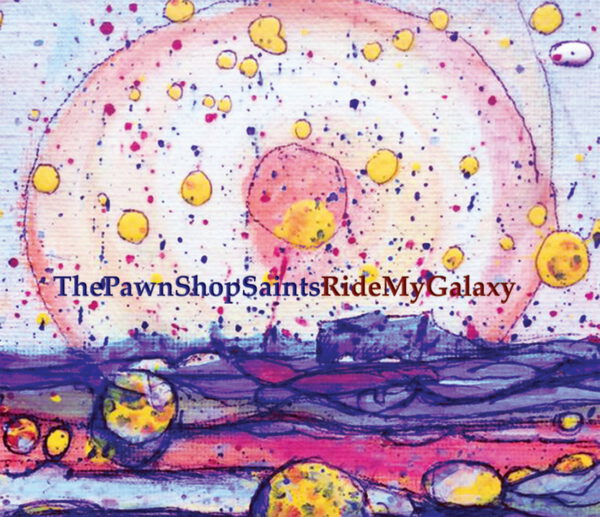 Their new album ‘Ride My Galaxy’ features 11 songs recorded, and mostly written, during the past two years of the Covid pandemic. The goal was to create as live a sounding album as possible, aiming for spontaneity with rough edges retained to maintain that feel.

Opting for a slightly fuller, more expansive sound at times than previously, with a bigger drum sound and psych-influenced electric guitars on the likes of ‘Chevy Nova’ and ‘Wicked’, while still plying their recognisable acoustic vibe on ‘I’ll Be Missing You Again’. Mixed in with the power pop influenced ‘diane’ to the simple acoustic punk country number ‘Half Ton’, and what you end up with is an eclectic mix of engaging contemporary Americana.

Recording of the album originally began two summers ago but was put on hold to record the 2020 album ordinary folks, before being finished in the summer of 2021, when Covid restrictions began to ease. Ride My Galaxy is the second of three planned albums recorded during the past couple of years…look for a more folk styled album from the Saints in the latter half of 2022.

‘Ride My Galaxy’ is the group’s third release, following on the heels of the Saints’ December 2020 album ordinary folks (which spent three months on the Euro Americana charts) and 2018’s critically lauded the double album texas, etc …

Jeb Barry has also released two solo albums – Milltown and Bury Me In A Lonely Place.

The driving force behind the band since its inception 10 years ago, Jeb is a regular performer in Nashville, especially at the Bluebird Café, and has over a dozen songs published though Washington Street Publishing in Nashville. A prolific songwriter, he has written over 4500 songs that roam through all styles of music. His more recent songs have been compared to Steve Earle, Jason Isbell and Townes Van Zandt…sparse, weary songs of the darker side of life… for want of a better description …Americana at its simplest, and finest. Jeb also handles most of the band’s production and recording duties. Jeb first gained major label (Gary Gersh/Cindi Peters at DGC) attention in the late 80’s and early 90’s in power pop group The Typicals.

The songs of Ride My Galaxy….:

Chevy Nova (That ‘70s Song):
8-Tracks, Boone’s Farm wine, and classic American cars stress the mood of the opening number. Along with a catchy yet simple guitar hook it’s one that will drag you into the story quickly. A reminiscing song about first love…set in the 1970s…for those older listeners…

Stop Breaking Your Heart:
A simple, melodic slow rocker centred around Alan Taylor’s organ riff. Actually began life as a blues song, but soon morphed into the groove styled number that made the album. A “he’s no good for you” tune.

I’ll Be Missing You Again:
A simple, hard acoustic, Jason Isbell styled song about lost love and wasted lives. With nothing more than a guitar, bass, and slide guitar by Jeb, this song takes on a life of its own. This is the second take of the song, since the first had a rumble due to a Harley-Davidson motorcycle driving past the studio…a LOUD one.

Outlaws:
This bass drum centred song may seem like it has its roots in contemporary pop country, but was actually written with someone like Ryan Bingham in mind. Centred around overlapping vocals and heavy drums, it also pokes fun at the cartoonish ‘bad boy’ image seen in the States when 20-30 year olds put loud exhausts on little cars, like Honda Civics, which makes them seem like little race cars. Honda even makes a Civic that looks like a Hot Wheels Car.

Too Low For Tupelo:
This song started out as a Dead vocal styled (multiple vocals) rough and tumble tune with the goal to have it loose and fun…then we added the psychedelic styled leads to add to the feel of the song in almost a mini jam …recorded mostly live in the studio…well, as live as possible during a pandemic.

Jenny Why?:
A fan favourite of Jeb’s solo shows. A piano tinged song of a loser who loses his love… and deservedly so.

Wicked:
Another Wilco-esque (Wilco hosts their three-day Solid Sound music festival every other year in the band’s hometown) with a little Dead sprinkled in psychedelic Americana number…that’s as best as I can describe it…think of the Stones with the Dead with Wilco.

Exits:
Another hard dirt acoustic song with a classic opening line…“If life’s a highway, I’m just a wreck on the side of the road”. Originally intended to be a full band production but Covid got in the way, so here is the acoustic version…Recorded live in the studio with only vocal overdubs.

Ain’t No Mama Here (slow version):
A reprise of the ordinary folks Depression-era infused tune … this time around this dark tune is a slower version with fiddle solo.

Half Ton:
“I’ve got a, half ton of misery” is the perfect sing-along chorus. A simple, punk-country acoustic number. Recorded live in the studio.

Bluestown Music · 4 hours ago
@BluestownM
New Release: Delta Wires – If Somebody Told Me

Bluestown Music4 hours ago
New Release: Delta Wires – If Somebody Told Me