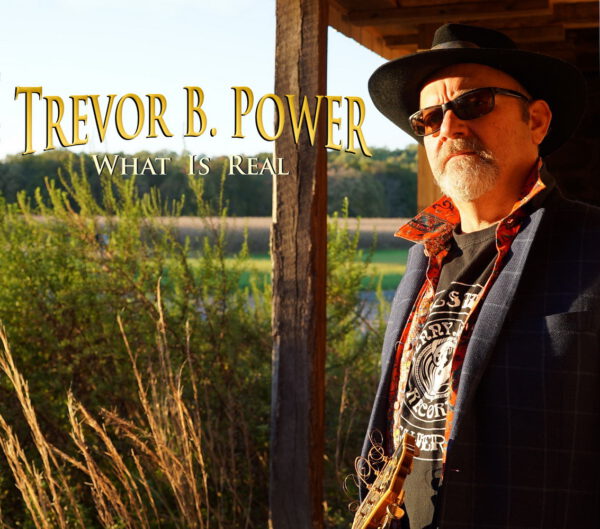 New Jersey music man Trevor B. Power can be added to the vanguard of disciples, who have studied the works of American songwriting master Woody Guthrie, who famously said “I can only write what I see.” Power joins the likes of Bruce Springsteen, Bob Dylan, Johnny Cash, and Joe Strummer, whose music reflects the world at hand and a portrait of the struggles of ordinary people trying to make a living in extraordinary times. His sophomore record, “What Is Real,” is the result of witnessing the spectacle of 2020 and a world pandemic.

Power returned once again to Sonic Boom Studios, collaborating with multi-instrumentalist, engineer, and producer Anthony Krizan along with friends and special guests. The sound remains the same with that muscular mix of Jersey shore rock ‘n’ roll infused with blues, roots
and soul that draws comparisons to the works of The Alarm, John Mellencamp, and CCR, centered on Power’s gritty vocals that always seem to sound happy and sad at the same time.
The ten new tracks have a melancholy undertone that go beyond a blues rock party, and, although it has its fun moments, is a deeper statement from an artist with something more to say.

The sociopolitical pop rock anthem, ‘World Gone Madd,’ kicks off the album with rocking power and 80’s infused drive. The funky ramble ‘Get Well Johnny,’ lays out the tumultuous history of an older brother, whose trail blazing life was both an example to follow and a clear warning of
what not to do. The track features a climactic harmonica solo from Will Wilde, who literally gives it his very last breath. The album’s first single ‘Pandemic 2020,’ composed during the COVID-19 lockdown and released last summer, roars with glorious rock guitar and earthshaking drums in a salutary hymn that is both an acclamation of the indomitable spirit of the American people and a scathing indictment of the selfish nature of our consumer driven society that led to this great catastrophe.

The easy-going ballad ‘I’m Still In’ details the plight of a man still carrying the torch while loves light is dimming, set to some sweet country overtones. The heavy duty blues shuffle, ‘Easier Way,’ is a piece straight out of “Highway 61 Revisited” that rumbles along with capricious
verbiage bolstered by gritty slide guitar and equally greasy blues harp. Long live rock redux ‘Life Is Good,” has a truckload of snarling cynicism to match its Johnny B. Goode optimism. NYC jazz chanteuse, Danielle Illario, plays the alluring foil to Power’s Keith Richards growl on the Stones inspired rocker ‘Sexy Witch,’ before he slides further down the x-pensive winos rabbit hole on the slinky country blues ‘I Am A Fool,’ that could be a lost track from “Exile On Main Street.” He then employs a classic blues shuffle to explore the familiar topic of the struggle between a man and his lover, simply titled ‘Woman,’ not as to disparage her but rather acquiesce to her power.
A chiming 12-string leads the acoustic album closer ‘This Old Road,’ a soaring tome of reflection, appreciation, and hope.

Like Guthrie and many songwriters, Trevor B. Power is striving to be a voice of the American
narrative on this fine collection and shine a light on beautiful things large and small.