The legendary British vocalist Paul Carrack (Mike + The Mechanics, Ace) has announced the
release of new single ‘You’re Not Alone’ on 19th March 2021 across all digital platforms via his own
independent label Carrack-UK.

The single’s release will precede the release of his new studio album ‘One On One’ this summer, the
eighteenth of Carrack’s career, and his first since 2018’s critically acclaimed ‘These Days’.

The releases are the culmination of Carrack’s time spent working in his  recording studio since the first lockdown began in March 2020, where he wrote, recorded and produced every song on ‘One On One’. In addition, Carrack playing all of the instruments, making his latest work the definition of a solo album in every sense.

Dubbed by the BBC as The Man With The Golden Voice, Carrack’s  breakthrough moment came when he wrote and sang ‘How Long’, the
much-covered 1974 classic from his days with Ace. Paul also enjoyed great  success as the voice behind numerous hits for other bands, such as
‘Tempted’ during his tenure with Squeeze and ‘The Living Years’ and ‘Over My Shoulder’ with Mike + the Mechanics.

Since the turn of the century, Paul has concentrated on his solo career, quietly building a huge, loyal fanbase – an audience that not only devours his albums, but turns out to see his frequent, extensive tours in their thousands. He’s done that the only way he knows; making high-quality, accessible popsoul with unmissable hooks and lyrics that say something about all of our lives.

Carrack says of ‘You’re Not Alone’, “I’d say the song is self-explanatory, but the sentiment is one of unquestioning commitment and support. I very much hope I get the chance to perform this song live with my band when we get the green light to start touring again, which we all hope will be at some point this year.” 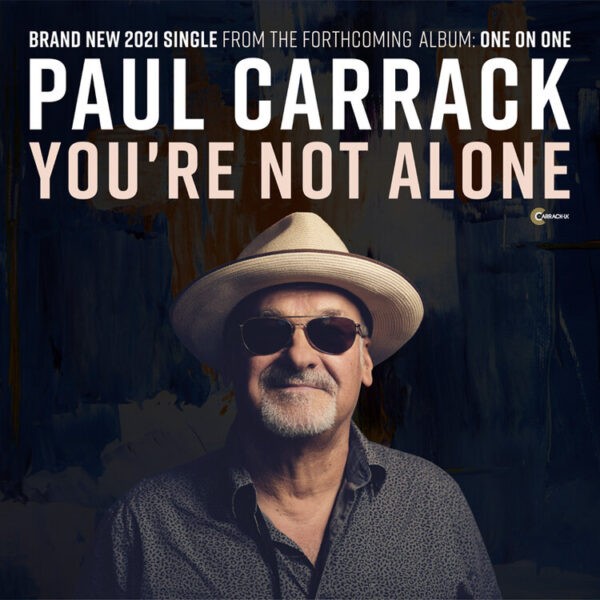