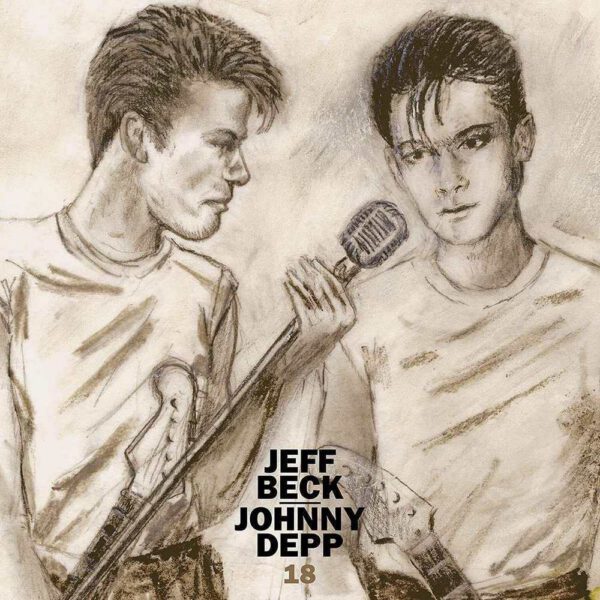 Jeff Beck found a kindred spirit in Johnny Depp when the two met in 2016. They bonded quickly over cars and guitars and spent most of their time together trying to make each other laugh. At the same time, Beck’s appreciation grew for Depp’s serious songwriting skills and his ear for music. That talent and their chemistry convinced Beck they should make an album together.

Depp agreed and they started in 2019. Over the next three years, they recorded a mix of Depp originals along with a wide range of covers that touches on everything from Celtic and Motown, to the Beach Boys and Killing Joke. In 2020, during the pandemic, they previewed their collaboration with their well-timed cover of John Lennon’s “Isolation.”

The duo’s 13-track album, dubbed 18, will arrive on July 15. Beck explains the album title: “When Johnny and I started playing together, it really ignited our youthful spirit and creativity. We would joke about how we felt 18 again, so that just became the album title too.”

18 will be available on CD and digitally, with a 180-gram black vinyl version coming on September 30. The cover features an illustration of Beck and Depp as 18-year-olds that was drawn and designed by Beck’s wife Sandra.

Leading up to the release of 18, Beck has launched a European tour, with Depp as special guest, which will conclude on July 25 at L’Olympia in Paris.

For the last 12 years Depp has recorded and toured with the Hollywood Vampires, a band he started with Alice Cooper and Joe Perry. The supergroup has released two studio albums that include guest appearances by some of rocks biggest names: Paul McCartney, Dave Grohl, and Joe Walsh. The list also includes Beck, who played guitar on “Welcome To Bushwackers,” a song on Rise, the Vampires’ second album, which came out in 2019.

Soon after, Depp asked Beck to play lead on a tune he’d written, the album’s first single “This Is A Song For Miss Hedy Lamarr,” an homage to the actress/inventor. Beck says it was the catalyst for the collaboration and is one of his favorite songs on the new album. “I was blown away by it,” he says. “That song is one of the reasons I asked him to make an album with me.” The track is available today digitally, along with an accompanying music video. Click here to view now.

Of Beck, Depp adds, “It’s an extraordinary honor to play and write music with Jeff, one of the true greats and someone I am now privileged enough to call my brother.”

In the studio, Beck says he and Depp challenged each other to leave their comfort zones with the songs they chose to cover. “I haven’t had another creative partner like him for ages,” Beck says. “He was a major force on this record. I just hope people will take him seriously as a musician because it’s a hard thing for some people to accept that Johnny Depp can sing rock and roll.”

Depp justifies Beck’s faith on the new album by showing off his incredible emotional range on songs like The Velvet Underground’s “Venus In Furs,” the Everly Brothers’ ballad “Let It Be Me” and Marvin Gaye’s soul classic “What’s Going On.” On the instrumentals, Beck demonstrates why he’s universally revered as a guitar god with stunning versions of Davy Spillane’s “Midnight Walker” and two songs from the Beach Boys’ masterpiece, Pet Sounds – “Caroline, No” and “Don’t Talk (Put Your Head On My Shoulder).”