For around four decades, Robert Cray has been a na explosive, hugely admired bluesman. With Clapton, Jagger and Richards paid-up fans, he has worked with many of the greats of blues music from John Lee Hooker and B.B. King to Stevie Ray. Five Grammys under his belt, and with a new album just out, I caught up with the man out on the road in the USA but ready to hit the UK in April & Europe in July. 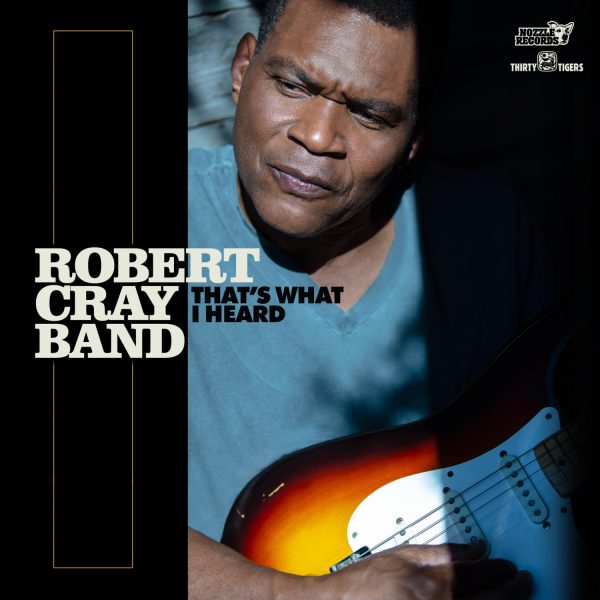 Robert Cray is waiting to take the stage at a small venue in New Hampshire when we finally connect: “It’s real intimate. About two hundred people. They serve dinner before the gig. We’ve played it maybe ten times before, it’s always great. I love it. You can see the beer, almost smell it, and hear the glasses clang against each other. It’s what it’s all about,” he laughs with evident pleasure and satisfaction.

With a new album, ‘That’s What I Heard,’ about to drop towards the end of March, Cray is out working, promoting the new release on his own label, Nozzle Records, with help from Nashville label Thirty Tigers. His first album in a few years, Cray is optimistic and ready for the road. The album launched in USA a few days before we hook-up and he confirms he’s had a few months downtime as he prepares to hit the international blues highway: “We had a couple of months off. That’s real unusual for us. We’re usually out there, working, but we had been in the studio recording and so had some time set aside. It’s always good to have time to sit back a bit and reflect on what you’ve done in the studio,” he says.

Working again with his clear favourite producer, Steve Jordan, Cray laughs when I ask if he prefers studio work to touring:”I love it all. It’s a different kinda thing. We got in the studio and it all came together real easy. Steve’s great, he knows how I work. A good producer creates the vibe, makes it work for everyone. We’d been touring as a band and came pretty much straight off the road, maybe a three-day break, then into the studio to record.  So we were working well together. We didn’t do any real rehearsal because of that. We had eight days in the studio and it just came together. It was great fun. Steve always says, ‘Don’t overdo it!’  And he’s right. We came off the road and my voice was right, it was warm, so it all worked great. When you go into a studio there can be times when your voice just seems cold. Steve knows all that. He’s great and he can do it!”

The latest album is full of funky get-down grooves and blues that in many ways is reminiscent of when this guy first exploded onto the scene many years ago. I mention this to him and ask how it feels to have been out there, gaining global plaudits for almost half-a-century now: “It’s weird, maybe. You just don’t think of it like that. You don’t think you’re that old, or aged,” Cray bellows with laughter, and adds: “It’s like, we get kids come up to us after a gig and they’ll say ‘My dad loves your music and he introduced me to it.’ And we sort of think to ourselves, ‘What!’ We’re no older than you.’  How did that happen, how has it happened. We’ve been doing it for so long now, it just slips past in a flash and it’s hard to believe the time has gone so quickly and we’re another generation.”

Cray is looking forward to hitting the UK in April and May with the band and the new release. He readily acknowledges and appreciates the hugely loyal fan-base the UK offers and recalls his early gigs in Britain when the likes of Eric Clapton would turn up to watch: “It was amazing really. Eric Clapton was a big-star that seemed to love what we were doing. He’d come to gigs and sometimes ask if he could sit-in with the band. Well, what can you say to that?! It was just so unexpected and a really amazing time.”

I gently suggest that these days, Cray is himself something of a blues legend, and again that roaring, easy and warm laughter erupts: “You just don’t see yourself like that. It’s hard to see oneself in that way, though it’s hard at times to come to terms with what seems to have just happened. I remember going through a stage-door once and finding Mick Jagger waiting behind it, waiting just to say hello. A personal hero. Crazy sort of thing. And Keith Richards, love him, another hero!”

And Cray is a guy who has worked with some of the greatest names in the business, an aspect of his lengthy career that he still finds hard to fathom and which brings yet more genuine laughter and near-disbelief: “I remember we were doing the album, ‘Blues Summit.’ In the studio with B.B. King, Albert Cummings and John Lee Hooker – Gods of blues music – my heroes. I looked over to Richard (Cousins) our bassist and a real old friend, and thought, ‘Wow. We must get these smiles off our faces! We were still only kids.”  When I suggest that must have been an extraordinary experience, he agrees and adds: “It was unbelievable. These were the guys I’d been listening to, the guys that shaped the music I loved. To be working with them in the studio was incredible.” The memory clearly still resonates, as he goes on to add: “John Lee was a great guy to be around. As a teenager I was deep into his music then this opportunity came along to play with him and it was that couldn’t keep the smile of my face thing.”

I ask if he has a personal favourite release and Cray shrugs and pauses before considering the question: “No, not really. Each album is different. They are all of their time. They all have a feeling and an importance at the time. Then you must move on to the next one. They all have their place.” And so was the preparation leading up to the new album, ‘That’s What I Heard,’ lengthy or did it need much thought before putting it all together?: “No, we just poured into the studio with Steve and it came together. I’m a last-minute man!”  Again that laughter echoes as he considers the thought. “I’ve worried some producers in the past over the years because of that way of working.”

“I’ve been doing this now for almost fifty years. Hard to believe, but as a younger person it was what I dreamed of, of being a musician. I’m fortunate to be doing what I do, making the music that I love.”

What about the awards circus, I ask: “It’s all good but you don’t set out for that. If it happens, that’s all great. I haven’t had a Grammy since about 1999, I think. So, it’s not central to our way of working,” he confirms. I quickly refer to one great gospel song included on the new album and Cray recalls his childhood: “Every Sunday my father, a serviceman, would play those gospel records, so it has always been part of my life. I said to Steve maybe we could try one on the new album and he agreed. So I looked through my collection and found ‘Burying Ground’ by the Sensational Nightingales. So we added that. It’s a great song, takes me back.”

As our time draws to a close, I suggest that one track, ‘You’re The One,’ comes from an all too often overlooked blues great, and Cray nods in agreement: “Yea, I love that song and Bobby Blue bland is just too overlooked these days. He was another of those real blues greats, a giant.”