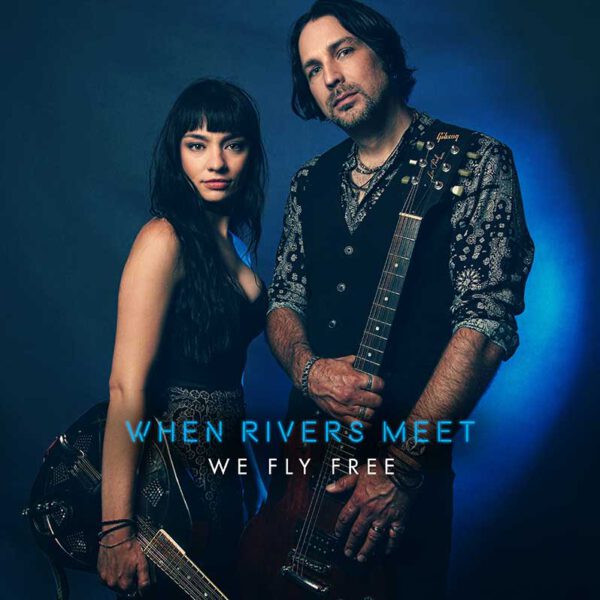 British husband and wife blues rock duo When Rivers Meetannounce their debut album ‘We Fly Free’ will be released on Friday 20 November 2020. The first single “Battleground” will be released on 9 October and is now available to pre-save from www.smarturl.it/whenriversmeet

Grace and Aaron Bond release their self-penned album ‘We Fly Free’ following their critically acclaimed EP’s ‘The Uprising’ and ‘Innocence of Youth’.

Their passion for blues rock shows through with an underpinning of traditional blues and classic rock. The duo have made a concerted effort to keep to a genuine, gritty sound using authentic techniques, including tube tape echo and reverb chambers, which have created a live sound that keeps a truly vintage vibe that not only has energy but is also a true representation of the ever evolving sound this duo produces.

WRM show great delight that a Hammond organ has been introduced into some of the tracks on this album. This classic blues rock feel will transport you back in time while also inducing a contemporary When Rivers Meet twist.
Grace sings lead vocal on most of the album, and showcases her impressive range, whilst adding distinctive slide resonator mandolin and fiddle.
As well as guitar, Aaron adds rich vocals that root the songs in harmony (taking lead on ‘Breaker Of Chains’ and ‘Take Me To The River’).

Recorded with Adam Bowers at The Boathouse Studio in the Suffolk countryside, it’s the perfect place to concentrate on recording with no interruptions, although you may hear the odd bird song captured in the open-plan recording space. Adam also plays drums and shares base and keys duty with Robin Breeze on some of the tracks, giving a rich depth and creating wall of sound.

“We’re so excited about this record” says Grace. “Our two previous EP releases have really given us such a good foundation and helped us to find our sound. When we came to record the album, we knew exactly what we wanted to create.”
“The album is titled ‘We Fly Free’, which is indicative of where we are right now. We feel we’ve grown so much in this last year as people and as a couple: it’s really given us the confidence to write with freedom.”

Released under their own record label: One Road Records

WE FLY FREE
Track by Track
BY Grace & Aaron Bond

Did I Break The Law
We kick off the album with energy! This one’s got swagger—Bonnie & Clyde baby—we’re on the run! Aaron’s slide guitar keeps this song thundering along.  It’s all about the thrill of the chase and a sense of freedom.

Kissing The Sky
With the live studio room feel and Grace’s slide Mandolin solo being played through a Marshall valve Amp, we wanted to show our classic rock influences with is tune that has a late 60’s/70’s vibe.

Battleground
The intensity is relentless until the inevitable “calm before the storm” and then it all kicks off again; that’s when the magic happens, and Graces voice rocks the heavens with authority. A real toe tapper of a song!

Bound For Nowhere
Imagine your life is a runaway train, and there’s no getting off. This is a headbanger of a song that we can’t get enough of playing. It was so much fun recording this one in the studio.

Walking On The Wire
We love this song, and we know you will be joining us on the chorus: sing it loud!   Blending and interweaving our vocals around different harmonies is something we love to do, and we get to rock out at the same time. What could be more fun?

I’d Have Fallen
We wrote this one sitting in our beaten-up VW overlooking the sea whilst on tour. A soundscape with thought provoking lyrics, bringing another colour to the album.

Breaker Of Chains
When you find yourself at a crossroads, which direction do you take? This is a question we often ask ourselves when writing. This dark Americana blues song was something we’ve been wanting to do for a long time.

I Will Fight
This is the first song that we wrote for the album, and it’s a real rollercoaster! It’s something that’s been rattling around in our heads for a while, and we knew this song had to go on the album. This piano led song is a nod to our forefathers who fought in the great wars.

Bury My Body
We love to sing in harmony…and as soon as the melody and lyrics started to flow, we fell in love with this song straight away. With the introduction of the only acoustic guitar number on the album, we can’t wait to sing this song live!

Take Me To The River
This is a hard-hitting slide-driven Rock song from the get-go—just the way we like it. While writing this song we knew it was going on the album, especially when we added psychedelic slide Mandolin lead breaks!

Friend Of Mine
Introducing the cigar box guitar and double bass, we wanted to show an older style of music that we love. This is very much in the vein of traditional Blues but with a modern twist.

We Fly Free
With a thunderous drum intro and an infectious riff, this song’s a journey from the heaviest of rock back down to evocative vocals, leading back into rock heaven – finishing the album just as we started. It’s the last song we wrote but instantly knew it was going to be the title track. A real head-banger to end on.

Bluestown Music · 1 hour ago
@BluestownM
Review: The B. Christopher Band – Snapshots From The Second Floor

Bluestown Music1 hour ago
Review: The B. Christopher Band – Snapshots From The Second Floor