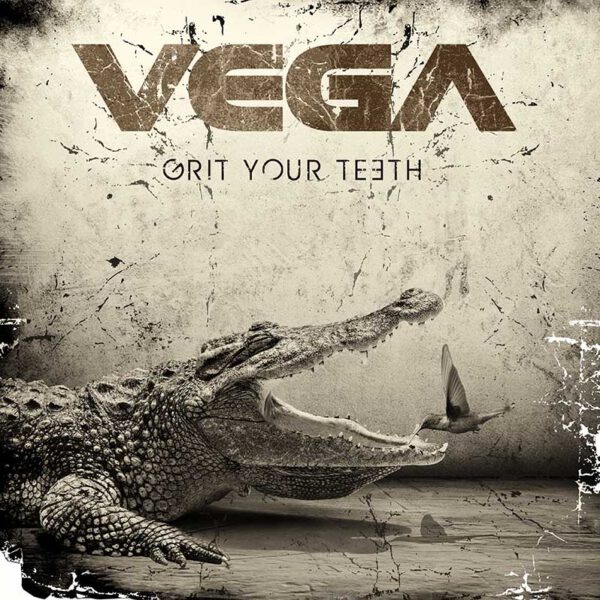 Buckle up and hold tight, VEGA are back with the album of their career. ‘Grit Your Teeth’ will take you to screaming highs and gritty lows. It’ll keep you coming back for more.

Says the band’s lead singer and frontman, Nick Workman, “Selfishly, we’ve taken a few risks by recording an album, that, first and foremost, we can be proud of. Don’t try and tag it with any sub-genre of rock or metal, just enjoy it.”

“Nick’s right, says VEGA’s keyboardist, James Martin. “We set out to do something different on this album. We wanted to stand out from the rest of the pack.”

“The band agreed on making a more modern sounding and edgy record.” Reflects VEGA’s drummer, Martin Hutchinson. “I think we definitely achieved that.”

“I think it’s our best album yet,”adds guitarist Mikey Kew. “If the last album, ‘Only Human’, was a commentary of what was going on our lives. The new album is very much a reflection of those times and the outcomes. It’s a very positive album in its overall message, but it also has a lot of dark moments. It was very therapeutic for the band to write and record the album.”

VEGA wrote the album from January 2019 until they started recording in August 2019. The album was recorded in an industrial unit in York with the Graves Brothers who have previously produced Asking Alexandria. That is more the “metal” side of the album and was a perfect fit for VEGA as they wanted to blend melody and hooks with power.

Joe and Sam Graves did a great job producing the album. They knew exactly what the band were trying to achieve,” says Workman. Tracking finished by September 2019. Mixing and mastering was completed before Christmas. 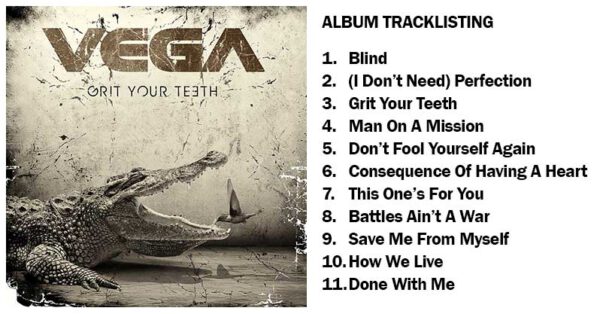 BLIND
“Got to be cruel to be mankind.”

There are so many “here today, gone tomorrow” trends these days. Social media is a constant, ever changing fashion forum. It’s so full of the latest surveys we should share, click bait and so much other crap. These days we’re looking for posts about Brexit and people asking for my prayers. This song is commentary on the fact we believe what we read, and we crave attention all the time. Maybe the heaviest/sleaziest VEGA song we have done? Kinda Guns’N’Roses meets Metallica vibe.

(I DON’T NEED) PERFECTION
“My life was back in fashion; retrospective action was needed now.”

We had about three songs for this album demoed at the point this song came along. Once this was written we ditched the others as this one set the standard. It has loads of swagger and just opened up some many avenues for us. Lyrically, this is very much about taking back control of your life and realising that you don’t need something to be perfect for it to make you happy. It just needs to not make you sad! The verse had a Nirvana vibe to the bass line until James added a really cool synth bass line to it and we definitely had the live environment in mind when we did the “yeah-e-yeah’s”. From the moment we wrote it we knew we wanted it to be a single.

GRIT YOUR TEETH
“My weapon of choice ain’t a gun it’s a voice.”

I had that line knocking around for ages but never had a home for it, so I was pleased to be able to use it. It seems even more relevant when you consider the Greta Vs the Donald Twitter spat. And this song is very much about David and Goliath, no pain/no gain and not giving a shit about the naysayers. When we demoed it, the verse had a very clean INXS funky guitar which sounded cool, but it didn’t quite fit the rest of the song. We gave it a bit of a Leppard “Sugar” vibe and it all clicked together. The middle section ended up with a really cool Gospel, Bon Jovi “Lay your hands on me vibe”.

MAN ON A MISSION
“It’s Friday night every day.”

Very much my mantra and how and I feel about life following a few changes in my personal life. This one will take a few by surprise, I think. Tom sent me the music and it became my Frankenstein’s monster. I had a vision for the song and cut it to pieces. Tom totally got it and knew where I was going, the other guys were a little unsure and I will never let James forget when we had to choose which songs we were going to use, he dropped this one. haha. However, it’s now one of his favourites on the album so he has got a reprieve haha. We really wanted the verse to start of very laid back and sparse and then go nuts!! I think we achieved that.

DON’T FOOL YOURSELF AGAIN
“You gotta feed it, gotta be it.”

One of the best choruses we have done in my opinion, I love it. Very much a song about being yourself and loving who you are and once again a “fuck you” to the naysayers. My daughter is growing up in a world where she faces a lot of very different challenges to when we were kids. Once again, social media and its demands. So, this is almost a conversation between me and her. She knows how proud I am of her. On every album there is a song that we talk about writing before we do. This was the one on this album. We wanted a straight-ahead pop/rock song with swagger and groove that was pumping all the way through. Credit to James and what he did on keyboards with this album. This is very much an album where we all performed for the song and none more so than James. He could have gone nuts on keyboard lines, but he didn’t because he chose the song over ego. By doing that he had to think even more about his parts to use them to great effect and once again the synth bass line in the chorus owns this song… along with the amazing melodies.

CONSEQUENCE OF HAVING A HEART
“Treading water, cut adrift in a sea of change.”

A different rhythm to this track which is great. We pride ourselves on trying to make each album evolve from the previous one. There are loads of bands out there who have four albums out and you couldn’t say which song came from which album. I don’t think we are one of them. This song and Save Me From Myself were nearly overlooked. We had the music, but they got forgotten as we had so many ideas kicking around. But the twins and I have a WhatsApp group and we were going through bits and pieces and these forgotten backing tracks came up and the time was right for them to be worked on. I ended up singing on the section Tom meant for the solo so Marcus will be pissed! This was also the title for the album for a while, but we decided it was a little too long.

THIS ONE’S FOR YOU
“Broken bones will heal but when your prides hit nothing takes away the pain.”

A great rocker that nearly opened the album. A piano solo in an all-out rocker is unexpected and I think that adds to the excitement and vibe of this song. Very much about our band ethos in that we are in this together and if one of us is in a fight, we all are. We dealt with some issues a few years back that could have broken a lot of bands, but it actually made us stronger. Very recognisable as VEGA but with a twist.

BATTLES AIN’T A WAR
“Everybody bleeds, everybody needs…”

We can all have a shit day, we hate Monday’s, have a bit of bad luck… stub our toe on the bed and think it’s the end of the world! This is very much about the fact we can sometimes drag ourselves down by thinking something stuff is worse than it actually is, and this maybe distracts us from the real fight we maybe in. On paper, this is a very simple song because it’s pretty much the same chords throughout. So, the challenge was making it not sound like that and add some serious dynamics to it. 3 guitar solos (this was like porn for Marcus), an operatic section and Tom nearly cutting his finger off just before he was meant to record some guitars, all added to the vibe of the song. A great song to listen to a night. Well, 4 minutes and 36 seconds of your night at least.

SAVE ME FROM MYSELF
“A cry for help that is never heard. The echoes, they deafen me.”

Another tune that is maybe more recognisable as VEGA. A very dark song that is an observation of how mental health issues have become an epidemic. There is not one cure for this disease, but I guess the first step is recognising you have a problem. Musically we wanted this to have real light and shade. Full of hooks (even the intro is a hook with the piano and guitar line ringing through), melody and powerful instrumentation. It’s funny that it nearly didn’t even get looked at but as mentioned above in “Consequence…”, it had its moment in the sun and shone brightly.

HOW WE LIVE
“I didn’t want to be a fighter but now the gloves are off.”

Another song that links us to our past but probably the last of its kind that we will write. Very catchy melodic rock with plenty of hooks and shredding haha. James got to play some keyboards on this song, so he finally earned his pay. Very much about leaving a legacy you will be proud of and living in the moment. People have always said about saving ‘for a rainy day”, well I think you should also get to enjoy the days in the sun too and live a life you can look back on without feeling you missed out on something you could have done.

This song is like a disobedient teenager with an attitude problem. At some point in life we all have someone talking crap about us. This song is about us looking them in the eye and saying, “And?” We wanted to end the album with a slap in the face and go nuts… so we did. There’s no guitar solo, but it rocks like an animal and has loads of shouting and screaming.