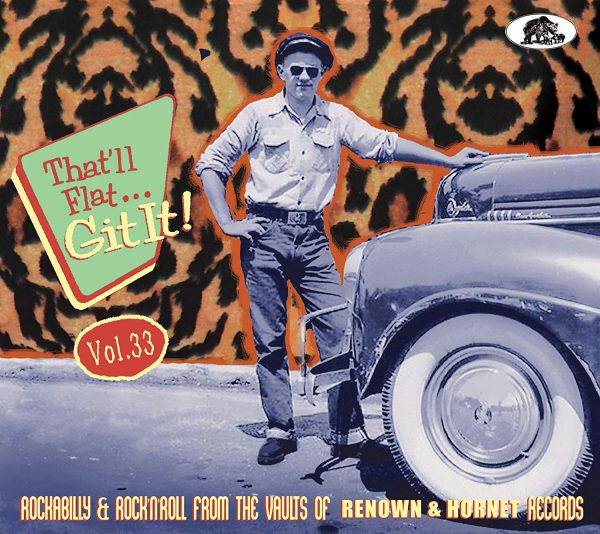 Including the first recordings by Wayne Handy and Joe Franklin as well as many more artists from the Carolinas.

Booklet with never before seen photos and information on the Renown label.

Renown Records was established in 1957 by Howard Rambeau in the city of Durham. The output of Renown and its subsidiaries Hornet, REL and Venture was an eclectic mix of good old rock ’n’ roll, rockabilly and country music. The Renown label existed until 1969 scoring several minor hits,  providing entertainment for a teen aged audience in the Carolinas and beyond.
As it corresponds to the concept of Bear Family’s ‘That’ll Flat Git It!’ series, only the rockin’est sides from the Renown catalog were chosen for this release. And these sides can compete with the best in the genre!
These are the stories record collectors dream of! Many more previously uncomped artists are on board here for the first time, such as Lonnie Dee, Joe Franklin & The Hi-Liters, Daryl Petty, Bobby Strigo with The Blue Notes and many more. Sixty years after the original recording dates, Bear Family makes it possible for these artists to receive the attention they have always been entitled to.
As most of the original master tapes are lost forever, the majority of masters have been taken from the original rare and hard to find Renown single (45s) releases and have been carefully restored and re-mastered to meet the quality standards of Bear Family.
This is a truly worthy and long awaited project which will find favor among fans of rockabilly music, 1950s music aficionados, and folks into North Carolina culture and history, and just plain music fans in general.
This is one Bear Family release that you don’t want to miss!
Tracks: