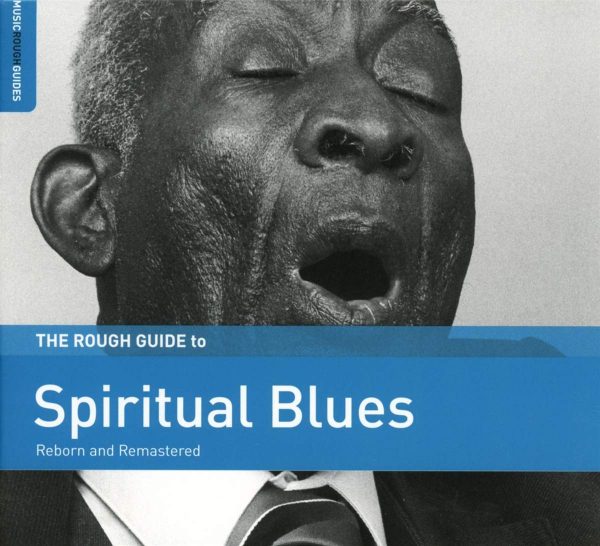 Blues and gospel, the secular and sacred songs of everyday folk, are both bound up in sorrow, loss, despair, hope, redemption, resilience and dreams. Despite their conceptual differences, gospel, the Sunday morning music of the church, and blues, the Saturday night music of the juke joint, shared many of the same roots, influences and musical traits. As the market grew for blues records during the 1920s, a black audience developed in parallel for religious songs and sermons. Consequently, many famed early bluesmen such as Charley Patton, Blind Lemon Jefferson and Blind Willie McTell recorded spiritual songs, often under different pseudonyms, to avoid offending the church who wouldn’t look favourably on associating the music of worship with that of the devil.

Many of the included artists would have started out singing music in church choirs early on before crossing over to the blues, whereas others remained gospel singers whose music was influenced by blues traditions. The ‘guitar evangelists’ combined the raw earthiness of the Delta blues with gospel sentiments, and by listening to its most remarkable performer Blind Willie Johnson, one can hear the mutual influence between the two and how a blues song could be transformed into a gospel song, or vice versa, simply by changing a few words. Other true guitar evangelists such as Reverend Edward W. Clayborn and Blind Willie Davis give further evidence of how playing slide for the Lord sounds pretty much like playing slide for the other side.

It has been said that the ‘Queen of Country Blues’ Memphis Minnie only once went to church to see a gospel group perform, but you wouldn’t know this when hearing her take on ’When The Saints Go Marching Home’ which evokes the mood and fervour of Southern black worship.

Legend has it that two of the featured towering figures of country blues once busked on opposite sides of the street in Marlin, Texas. Both the ‘Father of the Texas Blues’ Blind Lemon Jefferson and slide guitar evangelist Blind Willie Johnson have left remarkable musical legacies in the face of incredible adversity, dealing with blindness in conditions of poverty and confronted by all the disadvantages imposed by race segregation. The incredibly hard existence of the itinerant bluesmen meant that many sought refuge and deliverance in religion and would freely switch between playing blues and gospel. From the upbeat and ragtime-infused guitar picking of East Coast blind musicians Rev. Gary Davis, Blind Willie McTell and Blind Boy Fuller to the deep intensity of the ‘Father of the Delta Blues’ Charley Patton, these recordings illustrate how the line separating the two genres was very thin.

Tracklist:
01. Blind Willie Johnson: Jesus Make Up My Dying Bed
02. Reverend Gary Davis: I Am The True Vine
03. Blind Joe Taggart: Religion Is Something Within You
04. Rev. Edward W. Clayborn: You Never Will Know Who Is Your Friend
05. Josh White: I Don’t Intend To Die In Egyptland
06. Bessie Smith: Moan, You Moaners
07. Blind Willie McTell & Curley Weaver: Lord Have Mercy If You Please
08. Lonnie McIntorsh: The Lion And The Tribes Of Judah
09. Blind Roosevelt Graves: Take Your Burdens To The Lord
10. Memphis Minnie: When The Saints Go Marching Home
11. Dennis Crumpton And Robert Summers: Go I’ll Send Thee
12. Blind Boy Fuller: Jesus Is A Holy Man
13. Charley Patton: Prayer Of Death (Part 1)
14. Eddie Head And His Family: Tryin’ To Get Home
15. Son Bonds: Give Me That Old Time Religion
16. Thomas A. Dorsey: If You See My Saviour
17. Rev. I.B. Ware With Wife And Son: I Wouldn’t Mind Dying (But I Gotta Go By Myself)
18. Blind Willie Davis: Your Enemy Cannot Harm You
19. Mother McCollum: Glory! Glory! Hallelujah!
20. Kid Prince Moore: Sign Of Judgement
21. Washington Phillips: A Mother’s Last Word To Her Daughter
22. Blind Gussie Nesbit: Canaan Land
23. Daniel Brown with Blind Blake: Beulah Land
24. A.C. & Blind Mamie Forehand: I’m So Glad Today
25. Blind Lemon Jefferson: I Want To Be Like Jesus In My Heart
26. Rev. Emmett Dickenson: Death Of Blind Lemon