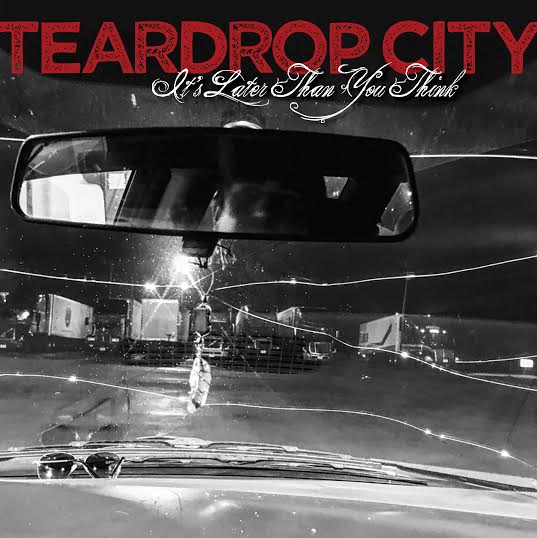 Teardrop City is an Oxford super group, featuring Tyler Keith of The Neckbones, Laurie Stirratt and George Sheldon of Blue Mountain, and drummer Wallace Lester, who has played most recently with Reverend John Wilkins and the Como Mamas.
A classic the first time you hear it, ‘It’s Later Than You Think’ walks the line between punk and classic country and girl group underground, the kind of record that can take an old song like “You’re Running Wild” (made famous by thc Louvin Brothers. Written by Donnic Winters and Ray Edenton) and make it feel like a Jim Thompson novel in miniature.
Keith, Stirratt, and Sheldon trade off singing duties, allowing for the album’s drunken tenderness. This is a band that bundles up their desperation and gets to work.
The cover photo, by Lester, is a parking lot seen through a cracked windshield. It’s an image that amplifies the album’s consers with breaking your ass just to survive.

Teardrop City formed in 2014 and calls Oxford, Mississippi home. Rock n’ Roll, Americana and Hiil Country Blues veterans Tyler Keith (The Neckbones, Preachers Kids, The Apostles and Kid Twist), George Sheldon (Kenny Brown, Blue Mountain, Preacher’s Kids) Laurie Stirratt (Blue Mountain, The Hilltops, Preacher’s Kids, Jim Mize, Healthy White Baby). and Wallace Lester {Little Joe Ayres, Reverend \Mlkins) are a reassuring reminder that Rock n’ Roll never dies.
Keith, Sheldon and Stirratt share song writing duties as well as lead vocals. Laced with killer harmonies, their original songs range from garage rock, high lonesome country, blues and pop to straight up rock n’ roll. Over the last 25 years, TDC members have played in numerous bands. touring the world over.
Teardrop City just wrapped up their debut record, “lt’s Later Than You Think”, recorded at Dial Back Sound in Water Valley, Mississippi with engineer/producer Bronson Tew, (Jimbo Mathus (Squirrel Nut Zippers), Dexateens, Water Liars, Cedell Davis, Leo “Bud” Welch).
“lt’s Later Than You Think’ is miscreant rock n roll and hillbilly stomp that hasn’t been this welldone in quite a while.” Matt Patton – Drive-by Truckers
Teardrop City is a haunting, kick-ass, mesmerizing, soulful, reflective, guide back to authentic and true rock’n roll. I knew when this super group formed something magic was about to happen. ljust had no idea how damn far they’d take it. The album reminded me so much of the Stones’ Exile on Main Street or The Kinks’ Muswell Hillbillies. It’s genius musicians making the kind of music they love. And that, my friends, is nothing but pure joy in a cynical age.

Tracks:
Running Wild
I’m a Sinner
It’s Later Than You Think
Closing Time
I’m Leaving Town
I Felt It, Too
Little Bill
Sisyphus Blues
You Don’t Know Him
Worried Feeling
Moment with You
I Wish I’d Never Fallen in Love