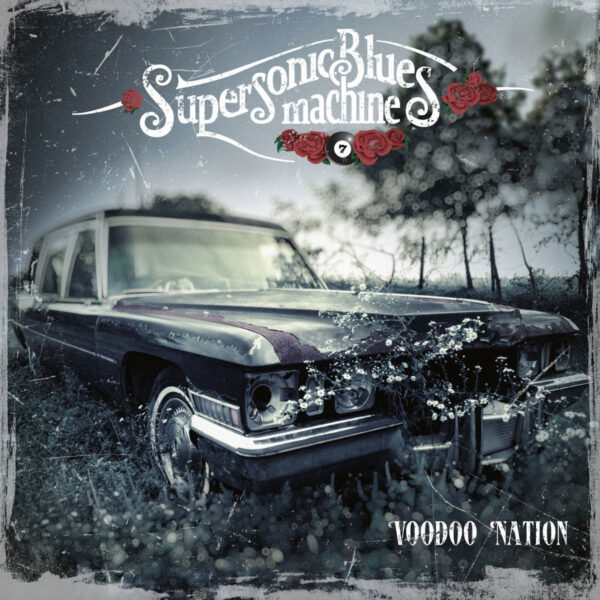 The album once again features another coming together of icons along with some of the most exciting names in blues; Charlie Starr (Blackberry Smoke), Eric Gales, Joe Louis Walker, Ana Popovic, Kirk Fletcher, King Solomon Hicks, Josh Smith & Sonny Landreth.

You can watch the official video for “8 Ball Lucy” ft. Sonny Landreth here:

“The general discontent in the world at the moment is so widespread, we get told to embrace it because that’s life,” says Fabrizio Grossi. “No, that’s not life,” he asserts. “It’s how we’re forced to live nowadays. Voodoo Nation refers to the times we’re living in, at least here in the States, but I guess the whole world can relate. We’re getting to the point where we’re living out life almost as Zombies. We’re little machines.”

But there is always hope, which is what Supersonic Blues Machine has always been about.

Voodoo Nation is the band’s third studio album. On their evolution, Fabrizio says, “Kris comes from this British school of hard rock and blues. This is a different sound to Kenny and me with the Allman Brothers, Sly Stone & The Family & Mountain. On Californisoul (2017), we were going more West Coast Funkadelic 60s and overall jam vibe. Blues but with more of a hippy flower power.” “With Kris, we wanted his footprint there, so that’s why you hear Led Zeppelin, Pink Floyd, and Gary Moore. Kind of a Union Jack imprint over a Star-Spangled Banner.”

The lyrical front on Voodoo Nation is less forgiving than everything in the past. “I’m not saying fuck flower power because that’s always the message,” Grossi says. “But there are very introspective things and a lot of the theatrics that we are dealing with on this record which I would say are fairly common in the blues but are dealt with a twist. There is a lot of Devil’s stuff in this record.”

Louisiana slide-god Sonny Landreth features on the haunting “8 Ball Lucy.” The song is a story about it being “easy to fall into temptation when you’re broken down and somebody comes along saying all the right things. That’s the true Devil, and she’s so good at playing her cards,” he says. The 8-minute “Devil at the Doorstep” features Eric Gales – whose recent album Crown was a #1 Blues Billboard hit. “With Eric, it can start as a 3-minute 12 bars Blues and morph into an epic Led Zeppelin Dazed and Confused thing. I also think it’s a perfect soundtrack for a horror movie…If the story wasn’t real!” he adds.

They underline problems faced by musicians on “Coming Thru” and “Get It Done” – the latter features Josh Smith and “Do It Again” is another firecracker that rounds off the theme with Ana Popovic. Young Harlem blues-sensation King Solomon Hicks features on the call to arms “You and Me.” The band’s trademark soulful blues sound can be heard beautifully on “I Will Let It Go,” featuring Kirk Fletcher, and the sumptuous “Is It All” with the legendary Joe Louis Walker. The album closes with the inspirational Rootsy Rock “All Our Love” featuring Blackberry Smoke’s Charlie Starr.

The song came together in the summer of 2020 whilst there were the biggest fires in living memory in California. “I was dropping off donated clothes in Woodland Hills. We were heading down through the infamous 405 and were literally driving through fire – on both sides of the road.”

“I realised that we’re in one of the world’s richest cities, and there’s discontent, plus climate change and everything else going on. How is this happening? It’s total devastation. I was like, no, no, we need a major reset here. For all the wrongs in the world to be fixed, it requires all our love. That’s the song, a message of hope,” Grossi ends.

Bluestown Music · 18 hours ago
@BluestownM
Review: The B. Christopher Band – Snapshots From The Second Floor

Bluestown Music18 hours ago
Review: The B. Christopher Band – Snapshots From The Second Floor