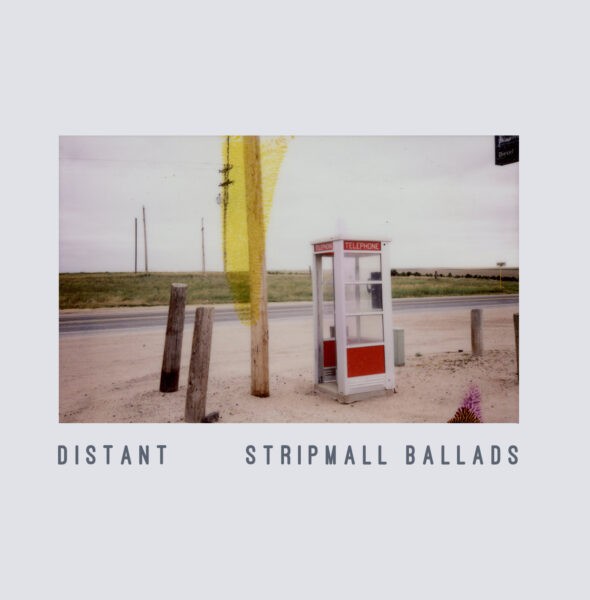 ‘DISTANT’ is the newest addition to the Stripmall Ballads oeuvre.

Stripmall Ballads is the moniker for Phillips Saylor Wisor. A founding member of the acclaimed old-time duo, The Shiftless Rounders, and touring banjoist for the IBMA award-winning bluegrass band, King Wilkie, Phillips continues to create original outsider folk music that owes as much to Neil Young as it does Maybelle Carter.

Phillips Saylor Wisor (Stripmall Ballads) has been taking the backroads since he started troubadouring in ’93. On one such excursion, freshly heartbroken and adrift across dirt roads in Middle America, Phillips sat down at a crossroads – and Susan stopped. The ensuing summer of wandering through the American heartland and underbelly led inexorably to encounters with various souls, both fraught and forlorn. The songs that came out of those various free rides and intersections are herein collected – beautiful folk-rock alt-country celebrating wanderlust and serendipity through character explorations and dark-end-of-the-street real-life confessions.

Based out of Maryland, Phillips has opened for/toured with the likes of The Be Good Tanyas, Danny Barnes, The Sumner Brothers, The Old 97’s, Sarah Harmer and others. He was a founding member of the acclaimed old-time duo, Shiftless Rounders, a touring member of IBMA award-winning bluegrass band, King Wilkie, and is an in-demand clawhammer banjo teacher.

Phillips Saylor Wisor is an American folk singer and songwriter performing and recording as Stripmall Ballads.

After discovering the Library of Congress field recordings of American folk music at 16, Phillips left school and spent the next three years tramping around the country writing songs and performing whenever possible. He would regularly head to Nashville and spend a week doing the songwriter circles at the Bluebird or Broken Spoke.

In 1998, Phillips met his banjo guru, Diane Sanabria, when they both played the Northampton Folk Festival and thus began his deep dive into the world of old-time, clawhammer banjo. He was steeped in the repertoire of the Round Peak style, the Hammons (WV) tradition, the contra dance tunes and the Kitchen Tunk social music of northern Vermont and southern Quebec.

In 2003, Phillips met a jazz musician named Benny Sidelinger and they started the old-time band, The Shiftless Rounders. Their musical idea was simple – paying homage and reimagining string band music but with the banjo and dobro being the main instrumental voices. They recorded their first album Ghost in the Radio and bought an old Chevy ambulance at a county auction and that set of wheels became their home and they lived like hobos.

In 2005, the Shiftless Rounders released their second record Places to acclaim and they played around 150 shows that year. They performed many times at Oregon’s Pick-a-thon Festival and the San Francisco Old Time Music Festival. Through Folk Alliance performances they became friends with the Canadian folk band Po’ Girl and they opened shows for The Be Good Tanyas. In 2006, they were chosen by Sarah Harmer to open during the US portion of her I Am A Mountain tour and performed at the prestigious World Cafe Live in Philadelphia.

The Shiftless Rounders released their last album, Warm Clothing Line, in 2007. Phillips was more interested in writing original songs than he was in performing traditional string band music so he returned to Washington, DC and started recording his songs under the name Stripmall Ballads, a nod to Woody Guthrie’s Dust Bowl Ballads.

In 2008, Phillips recorded the debut album Since Jimmy Died and was soon back out on the road performing solo as Stripmall Ballads. He found wonderful comrades in Canada, touring with the Sumner Brothers, songstress chanteuse Carolyn Mark and Canadiana honky-tonk heroes, Luther Wright and the Wrongs. He also found welcoming audiences in NYC at the Rockwood Music Hall and Banjo Jim’s (RIP) and on the west coast he made great friends with banjo wizard, Danny Barnes. Phillips followed that record up with Ballads, Stripmall, which further explored the style of deeply personal songwriting he was developing.

During that time, Reid Burgess asked Phillips to join his IBMA award-winning bluegrass band, King Wilkie, to promote their latest record, King Wilkie Presents: The Wilkie Family Singers. When Phillips wasn’t on the road with King Wilkie, he would take off and play Stripmall Ballads shows. King Wilkie played extraordinary shows at some of the country’s finest venues, including the Freight & Salvage in Berklee, California and NPR’s Mountain Stage in West Virginia.

In 2013, Phillips recorded the EP, Killer, with producer Tom Hnatow (Horse Feathers). Working with his old friend Danny Barnes (Bad Livers, Dave Matthews), who had started the cassette-only record label Minner Bucket Records, they released on cassette only, The Field. Also that year, he worked with the indie folk pop band, Vandaveer, to record their album O, Willie, Please – a beautiful and haunting piece of folk-pop that was received very well by critics and radio.

By 2016, Phillips could hear the road calling again. He took the summer off to head west with one simple rule – no highways, back roads only. He would drive until he came upon a crossroads, pull over, and take out his banjo or guitar and begin to play. He kept playing until someone would stop, at which point the old blues crossroads mythology would be put to the test. It’s hard to say if those people were devils or angels but there was a definite magic to those chance encounters that was reaffirming. One night in Ohio, Phillips called up some musician friends of his to come meet him and they recorded two new songs that would eventually be released as the EP, Good For A While.

This new way of back-roads-only traveling and playing sets almost more as a piece of performance art rather than the traditional mode of touring really felt right to him and Phillips found that he was getting closer to a purer essence of the songwriter experience that he had been hunting for since his teenage years. While Phillips was “rubber-tramping,” songs started to pour from his guitar. He stopped in Columbus, Ohio to record these songs with the rock band Yellow Paper Planes, which became the latest full-length album by Stripmall Ballads, ‘Distant’.