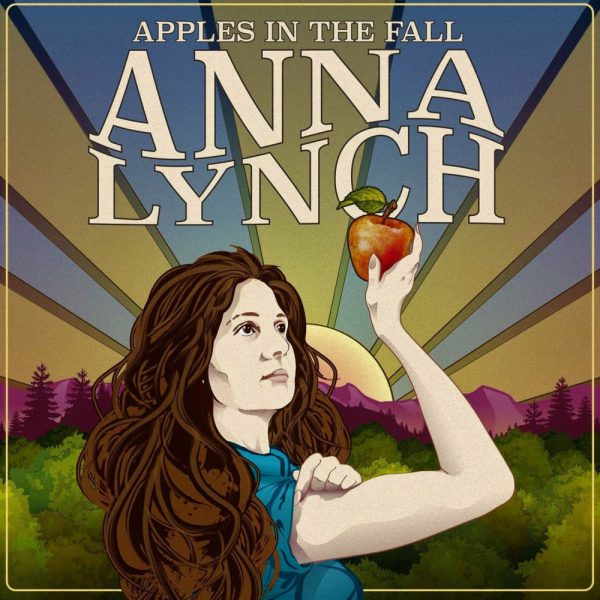 ‘Apples in the Fall’ is the second album by Anna Lynch. There’s been a gap of seven years (!) since the release of her debut album. And this one is an EP with (just) five tracks. So we’ll have to wait a bit long for a full-fledged (12+ tracks) follow-up to the first album. If that means that the musical wine will continue to mature, it should be worth the wait. Because, to be absolutely clear, Apples in the Fall is a lovely album, even if it’s just an EP. Old-fashioned lovely. “Old-fashioned”, not just in the sense of the album’s sound, but also in view of the topics Lynch sings about and the images that form in your mind as you listen to the songs. The album’s sound is crystal clear, with Lynch’s voice occupying a prominent space in the mix.

Sebastopol
Lynch focuses in these songs on the industrial history and decline of a California town where the apple harvest was processed at the local factory. “Was”, because with the changing times, factories to process the local harvests are disappearing from the landscape. In her own words, “Sebastopol, CA, used to be known for the Gravestein Apple, there is an Apple Blossom Parade, a Gravestein Fair, every street is named after redwoods, gravensteins and pines. Shortly after my family and I moved there when I was about 8, the entire apple industry was bought out by a competitor and all of the orchards were left to rot, right before harvest. The industry instantly died, and though the town is still there …it lost a big part of it’s identity going through a huge loss of industry, and even until this day is struggling to recover”. So what now prevails in Sebastopol is sadness, decline and hardship. In Apples in the Fall, Lynch sings about what Sebastopol was like when she was young and what there was to do in her home town, which was, in fact, not much, except to work in the apple plant.

1970, Elton John, Jerry Donnahue
Comparing these tunes to the works of other musicians and other songs, you can’t escape certain similarities. For example, both the line “Mama says it’s just how I left it” and the mood of the title tune recall Country Comfort, an Elton John tune from his superb Tumbleweed Connection. The similarities between the songs on Apples in the Fall and Tumbleweed Connection (1971) are too great to ignore. The compositions, the vocal approach: if you listen to Apples in the Fall with the Elton John of 1970 in mind, it’s very apparent. And the lyrics of Apples in the Fall and Country Comfort have much in common. Both are stories about how it used to be in the factory and both tunes rely on an external voice. In Apples that’s Mama, and in Country Comfort it’s the foreman who says that the new machine “cuts manpower by fifteen”. Just to be clear, Anna Lynch was born long after Country Comfort was first released.

Lynch’s sound on Apple in the Fall is consistently beautiful from start to finish. She’s not aspiring to be a typical country music interpreter. Instead she gives us creative compositions and a sober but varied singer-songwriter approach. So immerse yourself in Lynch’s nostalgia and melancholy, walk with her down Main Street in Sebastopol and reminisce about times long past that will never return.

These days Anna Lynch lives in Asheville, North Carolina and the acoustic instrumentation of old-fashioned Appalachian bluegrass of the region that Lynch has picked up suits her songs perfectly. It was evident in any case that Lynch is not an especially prolific songwriter and that is further confirmed by the fact that the last track on this EP, Beers in Jars, is a remake of a tune that appeared on her first album of a few years ago.

If you’re looking for artists and albums that come to mind listening to Apples in the Fall … here’s a good place to start: Kathleen Edwards and Lorri McKenna (Bittertown, 2004). The difference is that Apples in the Fall is more of an acoustic album. Highly recommended, this mini-album!

Tracks: (with Lynch’s own accompanying comments)

01. Apples in The Fall
“Sebastopol, CA used to be knows for the Gravestein Apple, there is an Apple Blossom Parade, a Gravestein Fair, every street is named after redwoods, gravensteins and pines. Shortly after my family and I moved there when I was about 8, the entire apple industry was bought out be a competitor and all of the orchards were left to rot right before harvest. The industry instantly died, and though the town is still there, and still quaint and welcoming, it lost a big part of its identity going through a huge loss of industry, and even till this day is struggling to recover. I was in my parents home in Sebastopol, visiting from Alaska when I wrote this song, in a surprising rush of homesickness. This song is as much about losing the apple industry as it is about losing my own childhood identity… which I would say is also struggling to recover.”

02. Hotter than Hades
“I recently found my first work tape of this song, and was simultaneously surprised and heartbroken at how long ago I wrote it. In a world of Tinder it’s hard to remember it’s not all just a game. Everyone has different rules, and I wanted to take the stigma off women who are shamed by other women for seemingly no good reason. Sometimes being the life of the party is the loneliest place of all.”

03. Do You Miss Me Yet
“I started to write this song in the Austin,TX airport, I was lucky enough to have some friends invite me to stay, and while there struck up a little romance and stayed a month longer than intended. It crossed my mind to just stay, but there’s something about whirlwind romances, the magic is that they were always intended to end, and when they do it’s a special kind of torture. Some might call it bittersweet…I think that’s BS, it’s def torture.”

04. Bitter Bones
“This is one of the first songs I ever wrote, in fact it might actually haves been the second. I moved away from home at a young age looking for something exciting, or at least different than the small California town I grew up in my first post Dorm apartment in Spenard Rd. in Anchorage Alaska, behind the Wonderbread factory, walking through the snow possibly being late due to live moose blocking my trail, just trying to make it to get to my coffee shop job by 7am.

I wrote this song to my mom, trying to explain why I left. It was quite a few years before she actually heard it. This song didn’t make the cut of the first album, it was too long and just didn’t fit. i’m happy to share it now”.

05. Beer in Jars
“I decided to include this song because I truthfully just enjoy playing it, and since it was written it has grown into my songwriting catalog, as one of those songs I couldn’t tell you where, when, or why I wrote it, but continues to be a set-list staple”.