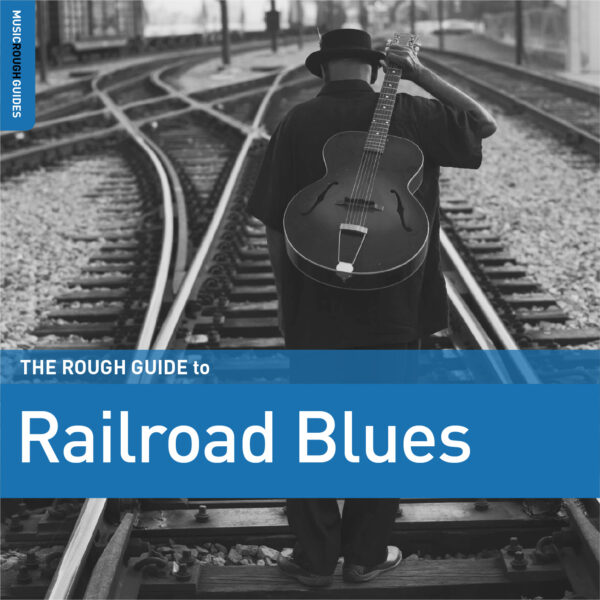 Since the very birth of the blues, the train has been a source of great inspiration for musicians. From the steam engine imitation tunes of pioneering harmonica players to wonderful variations on classic folk songs, this collection highlights how the railroad helped shape the blues.

In the early days of recorded blues, references to trains are frequent, reflecting the performers affinity with the railroad as a way of roaming around the South – a method of travel favoured by just about every itinerant musician. One of the most timeless, as well as poignant, examples is ‘Midnight Special’, most famously recorded by Leadbelly in 1934. Running past Sugar Land Prison, where Leadbelly had served time, the light of the Midnight Special represents the light of salvation, the train which could take the inmates away from the prison walls. Bukka White was another pioneering bluesman who spent time behind bars, and whose opener ‘Special Stream Line’ is a tour de force in bottleneck slide playing, which sees him introduce each train motif played on his guitar with verbal cues.

When it comes to imitating the sound of a train, the harmonica reigns supreme. Early players such as DeFord Bailey, Noah Lewis and Eddie Mapp recorded seminal unaccompanied train-inspired pieces which mesmerise to this day. Producing driving, rhythmic chords and imitating the hissing steam and train whistles, they were able to create the feeling of crossing the vast expanses of countryside, a musical idea otherwise difficult to convey through a formalized song structure.

From a life on the railways came a whole tradition of railroad songs; arguably the most famous was ‘John Henry’, the story of a steel driver who became a folk hero to his people. There are many versions of the song, which essentially tells the story of a man who hammered himself to death attempting to beat a mechanised steel drill. Mississippi John Hurt’s ‘Spike Driver Blues’ differs however, in that the sombre lyrics and melody don’t dramatically glorify John Henry but explain the narrator’s decision to walk out on a deadly job and not die in vain. Likewise, Furry Lewis’ ‘Kassie Jones’ is another wonderful take on a traditional American folk song about a railroad engineer’s death at the controls of a locomotive.

Cow Cow Davenport was a pioneering blues pianist who acquired his nickname from his ground-breaking boogie woogie piece in which his piano imitated a train. This featured version of ‘Cow Cow Blues’ was recorded in 1925 and features the powerful singing of Dora Carr. Similarly, the heartfelt vocals of legendary divas Memphis Minnie and Lucille Bogan give expression to railroad-inspired lyrics about the parting of ways when love goes wrong in their respective ‘Chickasaw Train Blues’ and ‘I Hate That Train Called The M & O’. Blues culture from the start has been energized by possessive romantic passion and the concept of the railway has always provided a great source of lyrical potential for separation and loss.