The Snarlin’ Yarns – It Never Ends 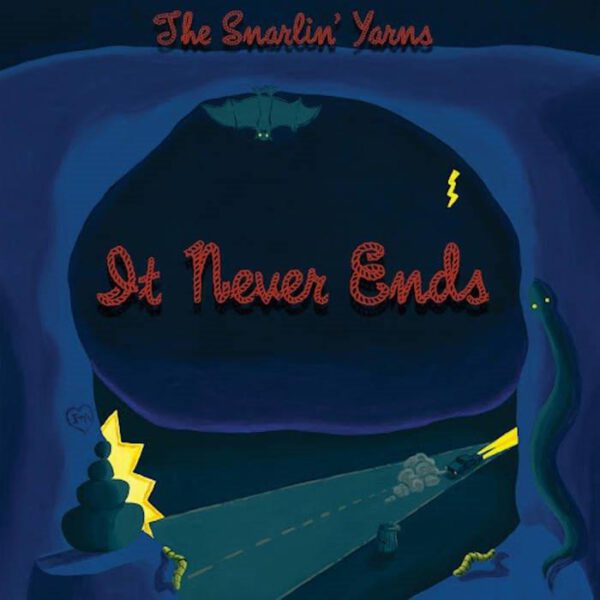 ‘It Never Ends’ is their second record from Dial Back Sound, a magical old-school Mississippi studio whose walls are well played-in. The title is a line from their song Electric Prairie Rain, and nails that feeling when something that moves you, stays.

The Snarlin’ Yarns are now, but old. They’ve learned their songs well, following not in the steps but spirit of Guthrie (Woodrow), Holy Modal Rounders, and Bad Livers. Joining the Alt-grass/country ranks of Truckstop Honeymoon and Freakwater and whatever’s next. Maybe Almost bluegrass?

The Snarlin’ Yarns are fiddle-banjo-guitar-uke-bass that gel instead of engaging in the instrumental break combat of modern bluegrass. The lyrics are smart (sorry bluegrass). The band has five, yes five, songwriters singing in one voice. And, then there’s the poet.

How to adequately describe this. You should see a show. The Yarns play and tell a story. Instruments ring, voices harmonize. And, at just the right time Abraham Smith takes the mic to make up a poem on the spot. Sends the old star cruiser into hyperspace.

Of precedents that paved the way: Langston Hughes composing poems with the rhythm and repetition of Harlem-renaissance blues and jazz; 50s poets like Kenneth Rexroth or Lawrence Ferlinghetti reading to a jazz combo; Jack Kerouac and David Amram tossing the lead back and forth with words and interludes. It’s beat.

Smith’s poems are inspired by the song, not about the song. They’re beyond the song.

Yarns songs balance the ancient with tomorrow. Then and now: Their Pretty Pollyanna is a modern Pretty Polly. Ketamean Ma is Will the Circle Be Unbroken with the angel wings of a medevac helicopter. There and here: the blues of Die for a Drink alongside the surreal
Mermaid or beautiful Electric Prairie Rain.

The Snarlin’ Yarns have no time for genres. They’re busy living and creating and being open to what comes next. While someone, somewhere, may be searching for a category, the Snarlin’ Yarns will proceed.