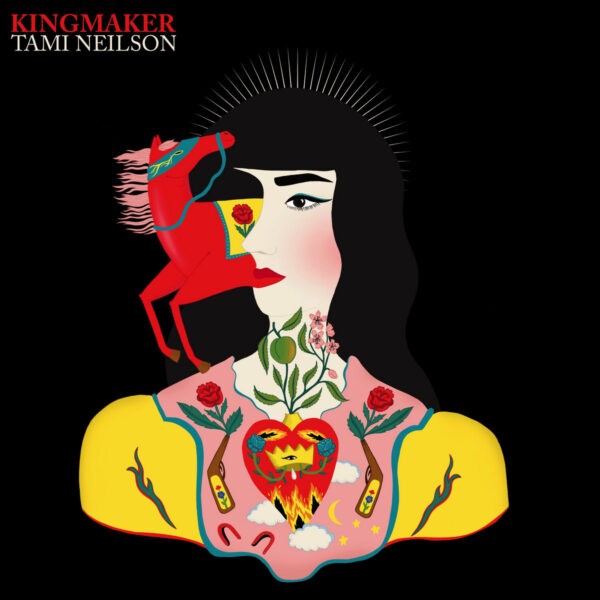 From being cradled as a baby in the arms of Roy Orbison, to performing a duet with Willie Nelson, you would think that Tami Neilson lived a country music fantasy life.

However, in between these monumental occurrences, The Neilson Family Band, with Tami’s parents, and two brothers, were having to busk in the streets of small-town Ontario in order to put food on the table, performing gospel concerts to prisoners, and roaring down the Trans-Canada Highway in an exploding RV on her way to open for Johnny Cash, which she managed to do, at 18 years old, in her pajamas.

And then Tami left to start her own family on the other side of the world in New Zealand, where she now resides. Her busking chops served her well, as she took to the streets of Auckland looking for her big break.
From open mic nights to clubs, to then headlining theatres and major festivals across New Zealand, Tami has now won almost every music award possible.

2022 now brings Tami’s 5th album, ‘Kingmaker.’ Recorded at Neil Finn’s Roundhead Studios, Kingmaker was born of the pandemic. A moment when women were struggling. Frontline workers fighting for human lives.
Essential services providers. Disproportionately affected by furlough: a “she-cession,” analysts termed it. Women put their dreams and careers on hold to care for their families and homeschool children. They mobilized online to bring awareness to domestic abuse and systemic inequalities. They marched in the streets for the lives of George Floyd, Ahmaud Arbery, and Breonna Taylor, and the remains of more than 1,700 indigenous children found in mass graves of former residential schools in Canada.

The songs of Kingmaker exposes industry systems, exploding patriarchal structures of the industry, society, and family. These are not new themes for Tami – both her 2018 album Sassafrass! and 2020 Chickaboom! called attention to misogyny and patriarchal structures.
But Kingmaker draws out this theme further. In the opening, title track, Tami calls out the men that control the industry and create “kings” of its male artists. But the song flips the script: with the cinematic flair of a Bond film, Tami puts women in the seat of power. Speaking for a collective of kingmakers, speaking sharply, speaking with irritation, she challenges what bell hooks (Talking Back) terms the politics of domination that render women nameless and voiceless in the industry. This is not a breakdown or a collapse. This is a revolt.

Tami questions gender roles and expectations of women in society. She shines a light on misogyny and sexual misconduct that pervades the music industry. Before they’re too grown to see… She sings of the underestimation of women, of their strength, power, fierceness, and resilience in the face of structural, and cultural barriers to their full participation in society.

Grief is central to this narrative. There’s the grief of loss. After finding a work tape of her father Ron Neilson of music for an unfinished song, Tami wrote the lyrics that completed “I Can Forget” – a song about being caught unexpectedly by grief. This theme continues in Tami’s duet with Willie Nelson on “Beyond the Stars.”
There’s also the grief that comes with realizing that the music that runs in your blood is tainted and poisonous for women and people of colour.

Tami’s story is at the centre of this feminist tapestry. “King of Country Music” reveals her country music lineage: singing with Queen of Country music Kitty Wells at the age of 10, touring with her family, slipping demo tapes in laundry bags of stars. Unlike the male stars who inherited their position by virtue of being white men in a system built by and for white men, this song addresses the challenges that women face earning their place in the industry.

The story of Tami Neilson is just taking shape, from her humble beginnings and tireless work ethic, and success, on her own terms. Tami Neilson is now using her voice to be a game changer, a cage shaker, a Kingmake.