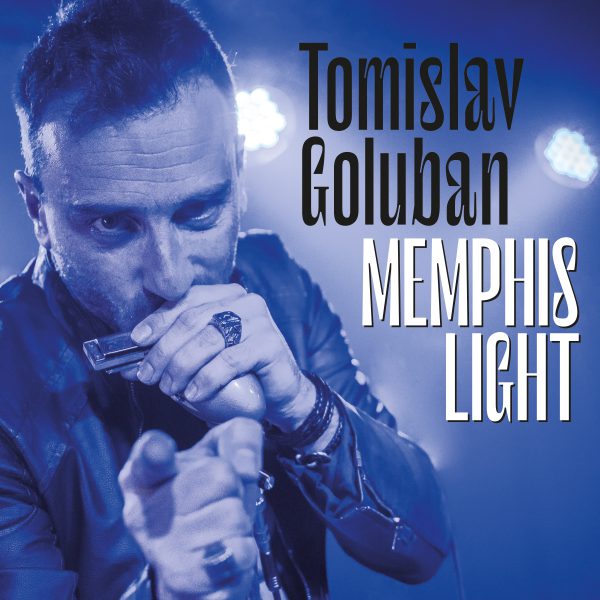 After a 20-year music career and 11 studio albums, the proverb “The older – the crazier” definitely applies to Croatian harmonica player Tomislav “Little Pigeon” Goluban, whose songs and performances burst with energy, passion, humor and above all, fantastic music. Goluban has been playing harp since 1997, inspired by old school masters such as Sonny Terry, Slim Harpo, Paul Butterfield, Gary Primich, Kim Wilson and Joe Filisko to name just a few, whom he still admires to this day.
Performing solo/duo and with a band, Goluban has played in the U.S. and across many European countries at festivals and events such as the Notodden Blues Festival (Norway), Amal’s Blues Festival (Sweden), Blues sur Seine (France) and International Blues Challenge (USA). Looking back at his discography reveals delta, country & Chicago blues, zydeco, rock ‘n’ roll and world music. He’s been recording his music in a wide span from raw delta duo sound to the full instrumental arrangement with 20 musicians playing one song.
In the period from 2005 to 2019 Tomislav has: • published ten studio albums and three maxi singles, • won four Croatian top discography awards “Porin” (the equivalent of a Grammy in Croatia), • won three “Croatian Musicians Union” awards “Status,” • performed in 20 countries in two continents (Europe and the USA), • won 4th place at World Harmonica Championship in Germany 2005, • is the sole Croatian endorsee of the world’s finest and most famous harmonica manufacturer “Hohner,” • was the first Croatian representative at International Blues Challenge, Memphis, USA in 2009 & returned in 2017, • was one of the founders and the first president of the “Croatian Blues Forces” association, • developed an educational music program called “The Harmonica in Blues” which is presented to the pupils of elementary and high schools all over Croatia.

Harmonicist Tomislav Goluban’s 11th studio album, ‘Memphis Light,’ is a sequel of sorts to his previous album ”Chicago Rambler,” which made significant impact outside Croatia. Nine of the ten tracks are written by Tomislav and the tenth is the classic ‘House Of The Rising Sun.’ As suggested by the album title, Goluban took a trip to the Home of the Blues to record at Ardent Studios in Memphis, Tennessee. Tomislav Goluban (vocals, harp) is joined by his band ”Little Pigeon” – Jeff Jensen (guitars), David Green (drums), Rick Steff (keyboard), and Bill Ruffino (bass). Mark Johnson (slide guitar), Vince Johnson (vocals), Franher Joseph, Reba Russell and Daunielle Hill (backing vocals) were guests on various cuts.
Tomi had the following comments about each track:
1. Hayloft Blues This cheerful, hill-country blues-colored track is inspired by old times when country people collected and stacked hay by hand. And it all worked out just fine as whole families of neighbors gladly helped each other. Hay was stacked with pitchforks onto the wagons pulled by horses, cows or oxen. The heavy labor, fortunately, was well-spiced with song and laughter. Also, common to both Europe and America–hay was very often the setting for various love activities and this makes the song universal.

2. Fun Starts Here Vince Johnson, a great Memphis vocalist and harp player makes a huge contribution to this song. He gently takes us into the mystic fantasies of what we strive for but never quite touch. This song is dedicated to all the women who bring out the wild side of men.

3. Country Bag This instrumental emerged from the positive energy of the musicians who took part in this adventure. This great track resulted from a moment of spontaneous interaction. After recorded, we agreed it sounds like a classic western movie soundtrack.

4. Disappear for Good The theme of this track is the fear of losing a loved one.

5. Memphis Light For Goluban, Memphis and its lights are reminiscent of both sadness and happiness. For years, he looked forward to visiting the Home of the Blues, Birthplace of Rock’n’Roll and Cradle of Soul. Finally getting there to compete in the International Blues Challenge proved a huge thrill and joy. But, alas, there were mixed emotions for the joy was countered by the great sorrow for the late friend Buha, who lived only long enough to make his last big wish come true – the pilgrimage to Memphis.

6. House of the Rising Sun The only cover on the album, this song became planetarily popular in 1964 when launched by The Animals, but its roots trace back to a traditional English ballad sung by immigrants at the beginning of the 20th century. Over the years, it has come to be thought of as an Afro-American song. Nobody holds the copyright and it was recorded in various versions by many blues, rock, jazz, folk and soul artists. Some claim the song is about a New Orleans brothel owned by Marianne LeSoleil Levant, whose name in French means ”the rising sun.” Others believe the song is about a women’s prison in New Orleans where the prison’s main gate was painted with the rising sun. Either way, this song has intrigued the imagination of many.

7. Spirit Will Never Get Old This song is in the memory of a grandfather, who never cared what other people thought. He was living his life in his own way in his own biopic. Everything he owned, he made with his own two hands. Although he wasn’t really an example of a family man, he was a wise, courageous and honest man.

8. Party Time Blues Light and funny, without any world-changing message or deep thoughts. It describes the feeling of the morning-after, short-term memory loss following a big night out. But, isn’t it usually better that way?

9. Woman Needs a Man A story inspired by a friend who had a desperate need for a man after the breakup of a long-term relationship.

10. Can I Be What I Want This song addresses the never-ending subject of men vs. women misunderstanding. These relationships sometimes become too binding and restrict the limits of one’s own freedom or personality. At times, finding the right balance can prove difficult and too much control often leads to too little love.