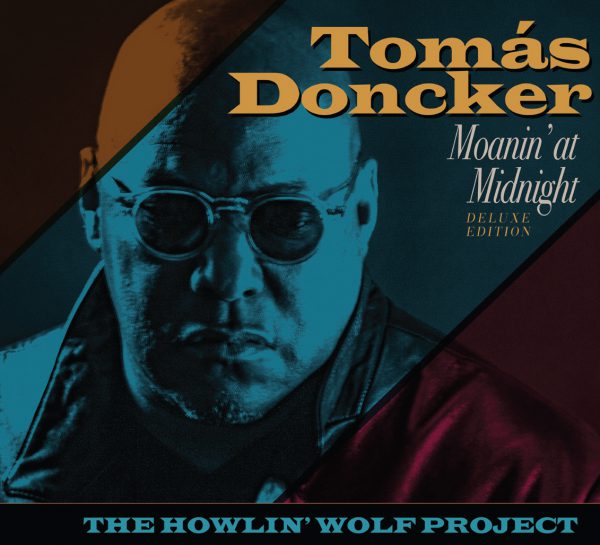 Doncker’s tribute to one of his idols,Chester A. Burnett (aka: Howlin’ Wolf) was originally developed during a critically acclaimed run at NYC SummerStage during the summer of 2013.
“We had been bouncing the idea of a blues record around for a while. A ‘hard-core’ modern Blues record.Every time we discussed it The Wolf came up. Willie Dixon came up. “Smokestack Lightning,” “Spoonful,” “Evil” – on and on…The stories – so vivid, even today! We wanted to be a part of that lineage, that history. We wanted to tell that “Same Ol’ Story” one mo’ time…Our way! We felt the time was right,” said Doncker about the original release. It went on to garner many accolades, such as press features in such notable publications as Guitar World, Huffington Post, No Depression, to name a few.
Doncker also received the blessing of official Howlin’ Wolf biographers James Segrest & Mark Hoffman, as well as Wolf’s Daughter Ms. Betty Kelly. “Moanin’ At Midnight” deluxe edition will also include bonus live recordings-including an original composition “Shook Down” written by Doncker and his songwriting partner-Pulitzer Prize winning poet Yusef Komunyakaa. “Yusef & I were so inspired by the raw, vivid lyricism of the great Willie Dixon, combined with Howlin’ Wolf’s dynamic persona, we thought it would be interesting if we could go down a similar path in the modern era.”

All Songs Written By Willie Dixon (BMI), Except “Shook Down”, written by Komunyakaa/Doncker (Groovysexmusic/ASCAP)

Bluestown Music14 hours ago
Who Are You: Barrence Whitfield & The Savages