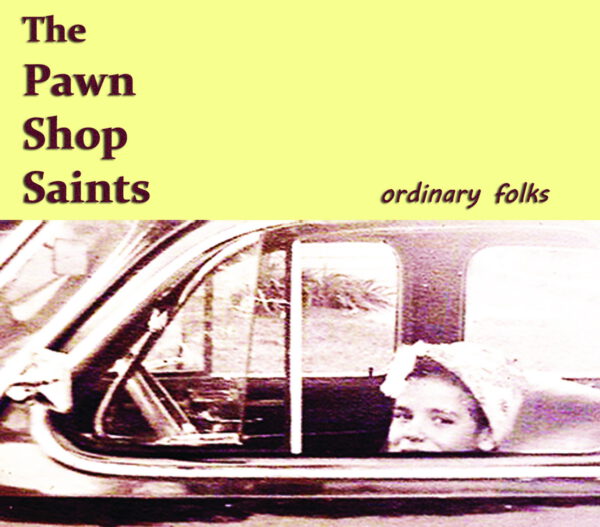 Fronted by singer-songwriter Jeb Barry, The Pawn Shop Saints are known for their sparse, hard dirt Americana, often exploring the darker side of life, and have been compared to the likes of Steve Earle, Jason Isbell, American Aquarium and Townes Van Zandt.

Based in the secluded Berkshire Hills of New England, the band’s new album ordinary folks, again released on their own DollyRocker Records imprint, is the follow-up to their acclaimed 2018 double-disc release texas, etc… , which spent three months on the Euro Americana Charts, peaking at #3.

The Pawn Shop Saints ‘Ordinary Folks’, is 9 songs of ordinary, and maybe not so ordinary people.

Two years ago, Jeb wrote fifty songs in fifty days while traveling south through Appalachian sections of the US, including three he wrote in a Nashville hotel room.

“I have spent years driving around the eastern half of the country, especially to the Carolina’s and to Nashville, trying to become a respected musician (not sure I’ve accomplished this yet). I began pulling off the interstates to hit the small towns where ordinary people live. You can drive a couple of miles and find other worlds, mostly small towns with non-brand name convenient stores, bars and chicken joints. I found myself interacting with the people that live there more and more and found out that I was too quick to judge them as less than the hard-working folks they were. Most were just ordinary folks trying to get through life’s hard times. These people are reflected in songs such as ‘Southern Mansions’ and ‘You Don’t Know The Cumberland’. I then found myself writing about the similarities we all have, and not so much focusing on the differences.”

Recording began last summer but was postponed to record an EP (currently unreleased, but look out for a 2021 release, with the working title A Safe Distance From Sinning).

An eye injury to Jeb then halted recording for a few months, and the COVID pandemic shut down the studio with 90% of the album completed. Recording was finished once restrictions eased, but only one person was allowed in the studio at a time, which made for slow going.

Rounding out the Pawn Shop Saints are Mike O’Neill on guitars and backing vocals, Josh Pisano on drums and Chris Samson on bass.

Jeb is a regular performer in Nashville, especially at the Bluebird Café. He and the Saints have also performed at such prestigious venues as Club Passim, the Hudson Music Fest, Chesterwood Americana Festival, Club Helsinki, and are six-time repeat performers at the FreshGrass Bluegrass and Roots Music Festival each fall… to name just a few.

All songs written by Jeb Barry
except ‘New Year’s Eve, Somewhere in the Midwest’
by Jeb Barry & Jason Isbell

‘You Don’t Know The Cumberland’
Written in a hotel in Nashville after passing through the Cumberland area of the Appalachian Mountains for about the twentieth time…and a year before the Cumberland, Kentucky coal mine events of 2019.

‘Body in The River’
Inspired by the Nashville Flood of 2010, albeit adding some darkness to an already dark event.

‘Southern Mansions’
Jeb heard this term while eating biscuits and gravy for breakfast at a Hardy’s outside of Myrtle Beach. Southern Mansions is the derogatory term for double wide trailers (as opposed to single wides, aka mobile homes). Driving through the Appalachians to Nashville, it’s a common sight to see these on the hillsides off the interstates. The song challenges the often stereotypical view of their inhabitants.

‘New Year’s Eve, Somewhere in the Midwest’
Written, and rewritten several times since, following a Jason Isbell New Year’s Eve tweet around 2013. Jason sent out two lines of lyrics to a song…asking someone to finish it. Jeb waited a month, saw that no one had taken him up on his request, wrote this song and recorded a much faster version which he sent to Jason, who said he liked it. Stuck alone in the studio during the COVID lockdown, Jeb recorded this sparse version for the album.

‘Ain’t No Mama Here’
A gospel inspired Dust Bowl imaged song of hard times and high anxiety…similar to today’s experiences for many people. A slower version will be on the aforementioned Pawn Shop Saints EP, due to be released in 2021.

‘Pack A Day’
Simply a song about the social changes that some people have difficulty facing and the consequences. (Smoking is demonized in the US, unlike many places in Europe).

‘Lynyrd Skynyrd’
A reminiscing tune that seems to be about the importance of music in a person’s life when they are younger but is really about facing your mortality at a young age. (Here based on the late 1970s music scene). Jeb wrote this after watching a recent documentary about southern rock band Lynyrd Skynyrd.