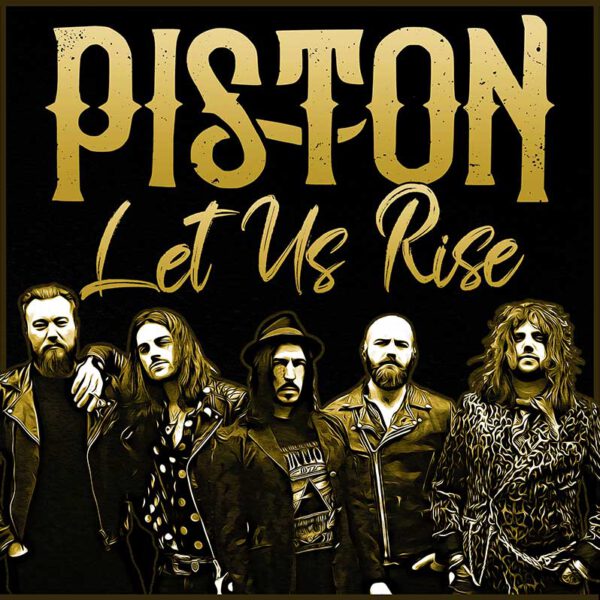 Piston are pleased to announce the release of their new single “Let Us Rise” on Friday 14th August 2020 which will be available on all digital music platforms including Spotify, iTunes and Apple Music. The single is remixed by James Curtis-Thomas (Aaron Buchanan) available via http://hyperurl.co/LetUsRisePiston.

The new single follows the recent news of Piston’s rescheduled UK tour with Bad Touch that will start on Wednesday April 7th, 2021 at The Waterfront in Norwich. Tickets are available from – www.badtouchrocks.co.uk/gigs-tours.

Piston are a British five-piece rock ‘n’ roll band made up of four members from the Midlands greased with a vocal roar from the south; which, when put together and fired up, produce a no-nonsense sound not to be reckoned with.  Their debut album was originally released in September 2019 to across-the-board rave reviews. In 2020, they supported The Cult and Glenn Hughes on their UK tours.

Lead singer, Rob Angelico opens up about ‘Let Us Rise’ – “As humans we all have to progress, and we can deal with anything together. We need to show love right now more than ever. The only race that matters is humanity. Let’s rise, come together, and become one. I’m excited to play this live and thank you for all of your support – you are awesome!”

Adds Piston’s guitarist, Jack Edwards – “I’m super excited to release this song! We had it completely re-mixed and mastered to bring a new life into the track. It’s a different take to what is on the album – it’s almost like the evil twin! The world’s a crazy place right now… ‘Let Us Rise’ – let’s come together and overcome this pandemic.”

“2019 was an incredible year for Piston,” says guitarist Jack Edwards.“2021 is proving to be a busy year for us including tons of festival appearances and shows.”

The album is a rock n’ roll rollercoaster ride treading the fine line between chaos and radio friendly rebellious rock. It’s got the guitar spirit of the Cult and the hi-octane energy of the Foo Fighters.

Piston’s debut album is the embodiment of hard work for the boys, having recorded one album already and choosing to scrap it all and start again in the pursuit of finding their true authentic. The debut platter tips its hat to different genres as it progresses, but never strays too far from the path its intended to go down, it shows diversity, power and confidence from the first contact between stick and drum right until the last chord has been struck.