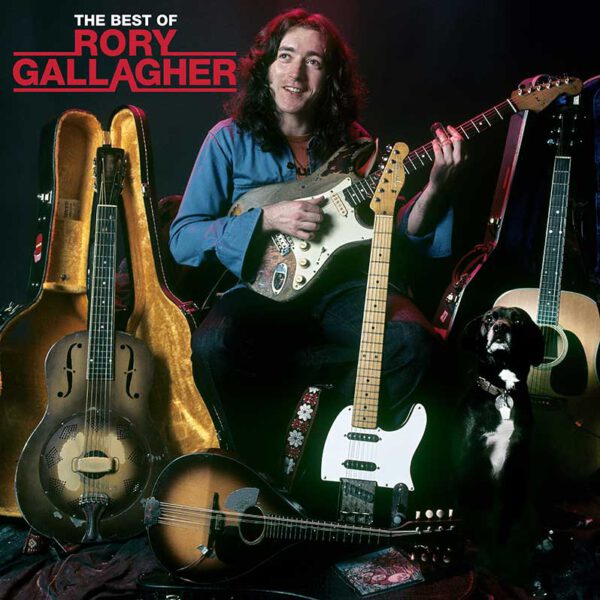 Following the commercial and critically acclaimed success of the recent albums “Blues” (2019) and the three-week running No.1 album on the Billboard Blues Chart “Check Shirt Wizard – Live in ’77” (2020), UMC is pleased to present a new Rory Gallagher best of collection entitled “The Best Of Rory Gallagher” on Friday 9th October 2020.

The comprehensive compilation includes Rory’s most iconic songs compiled from across his recording career, including tracks from Rory’s seminal first band Taste (1969) through to his final studio album “Fresh Evidence” (1990).

Unearthed from the Rory Gallagher Archives is a special bonus track “(I Can’t Get No) Satisfaction” – a rare outtake taken from Jerry Lee Lewis’ famous 1973 “London Sessions” featuring Rory singing and playing the Rolling Stones’ classic alongside the legendary Jerry Lee Lewis. The previously unreleased rarity is featured on the 2CD version and digital versions of the album, and available as a limited edition direct to consumer 7” vinyl single.

“(I Can’t Get No) Satisfaction” is available as an instant grat track with pre-orders of the album, and on all streaming and download services at https://rorygallagher.lnk.to/TheBestOfPR.

If ever there was a “musician’s musician” then that accolade belongs to Rory Gallagher. Renowned for his blistering live performances and highly respected for his dedication to his craft, he died in 1995, aged just 47.

His reputation has continued to flourish in the years since. Indeed, some of rock’s most seminal figures, from Jimi Hendrix to Eric Clapton, Joe Satriani to Joe Bonamassa, Queen’s Brian May to The Smiths’ Johnny Marr, Slash of Guns N Roses to the Edge of U2, have cited him as an influence. Rory remains a touchstone for all would-be guitar heroes in the 21st Century.

Unearthed from the Rory Gallagher Archives and included for the first time on the forthcoming “The Best Of Rory Gallagher”’ is this never heard before outtake featuring Rory singing and playing the Rolling Stones hit “(I Can’t Get No) Satisfaction” with the legendary Jerry Lee Lewis, originally recorded for Lewis’s famous 1973 “London Sessions.” The B-side, “Cruise On Out,” is taken from Rory’s acclaimed 1978 album “Photo Finish.”

When asked “How does it feel to be the best guitarist in the world,” Jimi replied: “I don’t know, why don’t you go and ask Rory Gallagher.” – Jimmy Hendrix

“The man who got me back into the blues.” – Eric Clapton

“There are a million guys who sound like Stevie Ray Vaughan, but I never heard anybody who could really pull off sounding like Rory Gallagher.” – Slash

” As soon as I heard Cradle Rock, I was hooked. I thought, ‘This is what I want to be when I grow up.”– Joe Bonamassa

“I really liked Rory, he was fine guitarist and singer and lovely man” – Jimmy Page

“He was just a magician, he’s one of the very few people of that time who could make his guitar do anything it seemed. It just seemed to be magic. I remember looking at that battered Stratocaster and thinking how does that come out of there?” – Brian May

“The man who changed my musical life was Rory Gallagher, I picked up a guitar because of him.” – Johnny Marr

“A beautiful man and an amazing guitar player. He was a very sensitive man and a great musician.” – The Edge

“An amazing player, very spirited … he had a particular sound using that Stratocaster and he really got it because of the brute force in the way that he played, he just had such a passion about it.” – Joe Satriani

“Rory was the one to measure yourself against. He was a real credit to music and pushed it to another level altogether.” – Peter Frampton