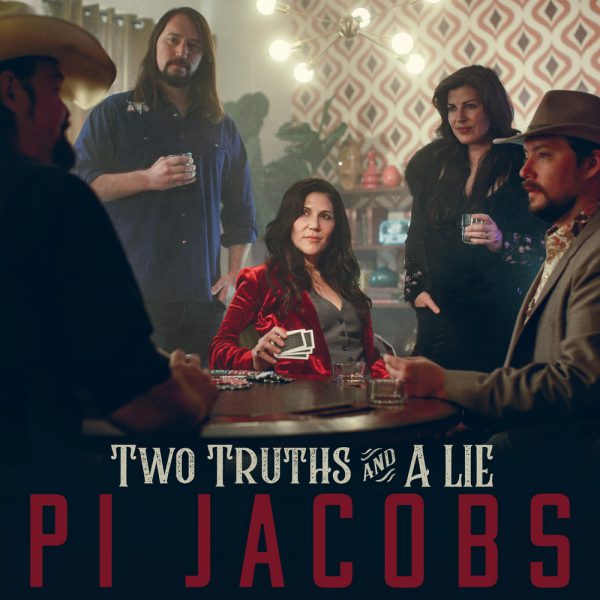 From electrified rock & roll to rootsy Americana, Pi Jacobs has chased her unique muse over the course of eight albums, gluing her catalog together with bluesy, unforced vocals and sharply-observed songwriting. She’s a traveler — a West Coast native who was born in San Francisco’s Haight-Ashbury district, bounced between hippie communes as a child, signed her first management deal in New York City, recorded 2017’s A Little Blue in the Appalachian Mountains, and continues to split her touring between the US and Europe — and her music reflects that broad perspective.
With 2020’s ‘Two Truths and a Lie’, she turns her focus both inward and outward, writing about female characters (both fictional and historic) who’ve rallied against violence, injustice, and their own inner demons to improve the world around them.

Originally, Two Truths and a Lie wasn’t meant to be a semi-autobiographical album. “The idea was to pay homage, in song, to normal, everyday women, doing extraordinary, brave, and inspiring acts,” explains Jacobs, who was raised by a single mother in the Bay Area’s arts community. “Of course, in the process, some of the stories that came out were directly about me…and some were not. Just like the game ‘Two Truths and a Lie,’ I’ll leave it to the listeners to solve the mystery and meet some amazing women in the process.”

Amazing women, indeed. On “Diana,” Jacobs sings about Diana the Hunter — the anonymous woman who killed two bus drivers in Mexico in 2013, carrying out her own form of vigilante justice in a city plagued by sexual assault — over bursts of dobro and driving percussion. She changes directions with “Broken Cup,” a song about weighing one’s history of past heartaches against the promise of a new relationship, and inhabits a host of different characters throughout the remaining tracks, all of which offer a unique female perspective. Some of those characters are in love. Some are in danger. Some are struggling with abuse — both self-inflicted and domestic. Together, they form Two Truths and Lie’s unique cast of women.

Like Irrational, her career-launching debut from 2001, ‘Two Truths and a Lie’ is rooted in grooves and syncopated beats. The decision to return to a more rhythmic sound was partially inspired by the crime TV show “Justified,” whose theme song — “Long Hard Times to Come” by Gangstagrass — mixes hip-hop percussion with country instrumentation. “I think I got into the show so I could hear the song over and over again,” says Jacobs, who began experimenting with drum loops in her homemade demos. When it came time to record Two Truths and a Lie, she brought in percussionist Butch Norton — an original member of the Eels, as well as Lucinda Williams’ drummer for more than a decade — to give the songs a beat-driven backbone.

To balance the album’s emphasis on percussion and southern-rock swagger, Jacobs also fills ‘Two Truths and a Lie’ with the rustic sound of bluegrass instruments, including dobro, upright bass, and banjo. That juxtaposition of electric and acoustic sounds helps build a bridge between her older material — much of which was rock- and pop-influenced — and 2017’s A Little Blue, which found her embracing a more rootsy sound. Recorded in several studios across the country (including Los Angeles; Floyd, VA; and her own California home), Two Truths and a Lie also makes room for three-part gospel harmonies, swirling keys, and the acoustic/electric blend of Jacobs’ 1954 ES-125 Gibson guitar. The result is an album that’s both a return to Jacobs’ amplified roots and a nod to the Americana influences that have always floated beneath the surface of her songs.

“It’s an interesting blend of sounds,” says Jacobs, who co-produced the album with Travianna Records president Mark Hodges. “It rocks, but it’s got plenty of dobro, too. With every album, I try to do something new, while also incorporating whatever material is influencing me at the time. When I released my first record in 2001, it was a poppy record that was influenced by beats — so in a way, I’ve come full circle. And in many other ways, I’m still uncovering new ground.”

Don’t let the title fool you. Two Truths and a Lie is as honest as it gets — an album about strength, struggle, romance, and the resilience of everyday women who, like Pi Jacobs, deserve their voices to be heard.