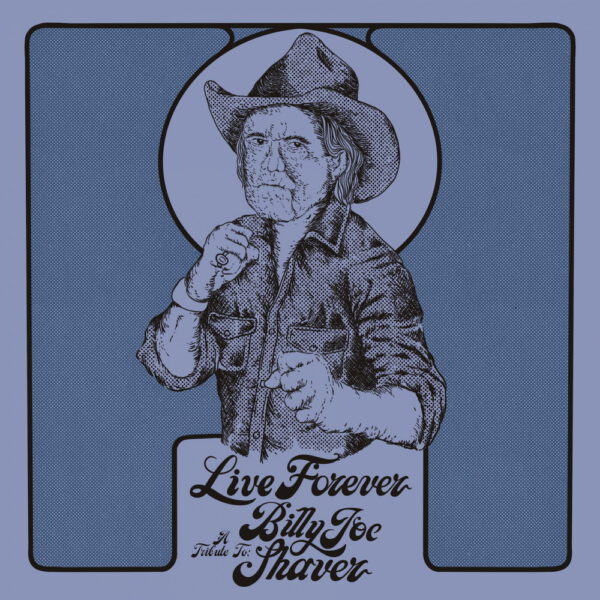 In honor of his birthday today, New West Records & Pedernales Records are proud to announce ‘Live Forever: A Tribute To Billy Joe Shaver‘ to be released November 11th, 2022.

The Texas singer-songwriter who died on October 28th, 2020 was an integral member of the Outlaw Country movement. A favorite among music legends, Johnny Cash once called Shaver “my favorite songwriter,” while Willie Nelson declared, “Billy Joe is definitely the best writer in Texas.” Upon the announcement of Live Forever: A Tribute To Billy Joe Shaver, Nelson said, “He was just real; there wasn’t one phony drop of blood in him.” AllMusic called Shaver’s songs “among the greatest in the whole history of the (country) genre” while the Washington Post said, “When the country outlaws were collecting their holy writings, Billy Joe Shaver was carving out Exodus.”

From his album liner notes, co-producer Freddy Fletcher wrote of Shaver, “His influence on the greatest of artists is what inspired this project. The album is a testament to his words and their deep impact on wonderful songwriters and performers. He’s a hero to so many, and we are honored to pay homage to his legacy.”

On the topic of songwriting, Billy Joe Shaver once said “when you write songs, and you write good songs, people will always remember you. Words will always outlive us. And if your name is attached to those words, you’re gonna live forever.”

About Billy Joe Shaver: In 1965, Billy Joe Shaver hitchhiked to Nashville and convinced the country singer Bobby Bare to listen to his songs. Bare quickly signed Shaver to a $50 a week job as a songwriter and recorded his song “Ride Me Down Easy.” Kris Kristofferson’s rendition of “Good Christian Soldier” and Tom T. Hall’s recording of “Willie the Wandering Gypsy and Me” soon followed. Shaver’s breakout moment came in 1973 when Waylon Jennings’ landmark album Honky Tonk Heroes was released.

Hailed as the first “Outlaw Country” record, ten of its eleven songs were written or co-written by Shaver. One of which, “You Asked Me To,” was a top 10 hit for Jennings and was later recorded by Elvis Presley. Shaver’s legendary debut album, Old Five and Dimers Like Me, was produced by Kristofferson and issued in 1973 as well. He went on to release more than 20 albums, including the Grammy-nominated Everybody’s Brother in 2007. His final album, 2014’s acclaimed Long in the Tooth was his first to chart in Billboard’s Top Country Albums.

Shaver’s songs have been recorded and performed by Bob Dylan, Johnny Cash, The Allman Brothers, and countless other legendary artists and his signature song, “Live Forever,” was performed by Robert Duvall in the 2009 film Crazy Heart. He was honored with the first ever Americana Music Award for Lifetime Achievement in Songwriting in 2002, was inducted into the Nashville Songwriters Hall of Fame in 2004 and the Texas Country Music Hall of Fame in 2006. Billy Joe Shaver died on October 28th, 2020.