Tomislav Goluban – 20 Years On The Road 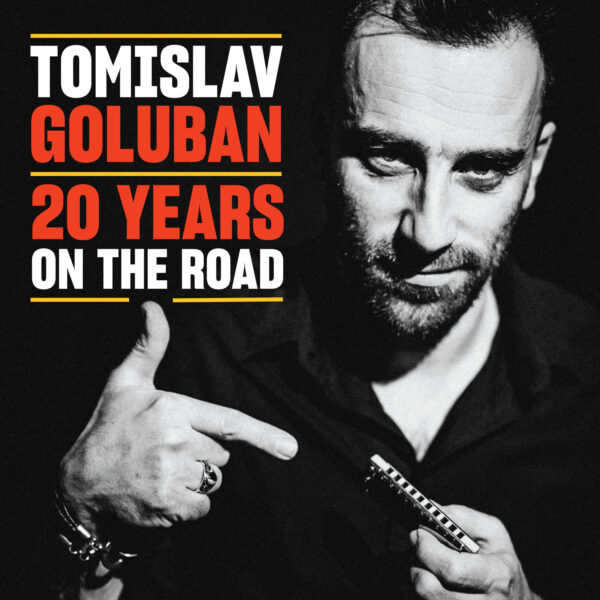 One of the treasured benefits of traveling the world playing music is that you accumulate a wide circle of friends, like minded souls and collaborators on your journey. Croatian blues singer, songwriter and harmonica player, band leader, blues educator, radio DJ, festival organizer and recording artist, the inexhaustible Tomislav (Tomi) Goluban celebrates his two decades as a performer by bringing some of those friends together for his 14th studio album, ’20 Years On The Road.’

The music was recorded live in the studio using three different sets of musicians in Croatia and Austria along with eight international guest vocalists contributing to the originals from Goluban’s catalog, plus a new instrumental, one beloved cover and Goluban’s theme song. “This is my ‘best of’ album after 20 years in the business. I’m so pleased to have such tremendous guest singers, mainly from my Blue Heart/Nola Blue/Blind Raccoon family, with whom I’ve collaborated the last few years,” says Goluban.

The Tobacco Road Blues Band steps up to help Goluban kick off the party with a ripping instrumental “Express Ride,” featuring the dual guitar attack from Peter Prammerdorfer and Mike Diwald that bolsters Tomi’s heavy duty blues harmonica wail. Goluban confesses his addiction to the blues on the lighthearted “Blow Junkie Boogie,” revisiting the title track of his sixth album and unofficial theme song. Naturally, he picked Chicago Blues scion, Skylar Rogers, to trade call and response choruses with him on the he-done-me-wrong blues “Searchin’ For My Baby,” from his Chicago Rambler album. Charismatic frontman and soulful guitarist, Mark Cameron, beckons us to the dance floor in “Party Time Blues,” from the Memphis Light album that features great slide guitar from Hrvoje Funda. British vocalist, Malaya Blue, demonstrates her range on the contemplative Delta Blues highbred “Electric Lights,” on which Goluban credits Robert Johnson with a portion of the lyrics.

The velvet baritone of Ryan Donohue tells the tale of a man trying to avoid trouble on the western swing number, “No Means No,” with a big band arrangement. Southern California singer songwriter Kelly Zirbes and Goluban picked up right where they left off on his last album collaborating on two more songs for this project; first the easy-going celebration of the vagabond life “Hittin’ The Road Again,” and then later in the album the politically charged plea for peace “Everyday’s Fear.” Swamp pop king Gregg “Mac Daddy” Martinez tantalizes with his smooth tenor on the slinky rhumba “Disappear For Good,” another great song from the Memphis Light album.

The Lone Star state lilt of the great Teresa James was a perfect choice to revamp “Speedin’Train,” by adding more fuel to the furnace of the fast-moving train beat blues. Crooked Eye Tommy throws down whiskey-soaked vocals on the snappy double shuffle “I Can’t Take It Anymore.” Rogers returns for the sweet remake of the swinging jump blues anthem “Forhill’s Boogie,” written for the Zagorje Blues Ethno Festival Goluban co-founded in 2014. Cameron also comes back to revamp the first single from 2016’s Blow Junkie album, “Gambler’s Blues,” with a little more muscle. Goluban and the Tobacco Road Blues Band close out the set running down a joyful rendition of “I Love You Baby,” from Sonny Terry, paying tribute to one of his early heroes and inspirations to become a harmonica wielding blues man.

Revisiting some of his favorite songs with new and old friends highlights Goluban’s many talents and confirms his mantra of “think globally – act locally.”
Rick J Bowen