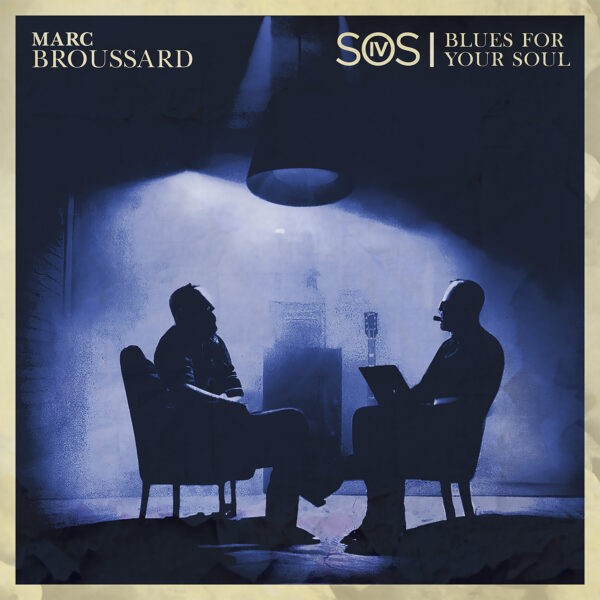 Long hailed as a powerhouse vocalist and king of Bayou Soul, Marc Broussard is altering his iconic recipe of classic soul, R&B, & blues with the help of renowned blues rock guitarist Joe Bonamassa, on his new single, “That’s What Love Will Make You Do,” a riveting take of the Little Milton classic.

Broussard’s dynamic, soulful vocals, combined with Bonamassa’s unmatched fretwork, deliver a knockout fusion of retro soul & modern blues. ”What Love Will Make You Do” is out today and is the first offering from Broussard’s forthcoming album S.O.S. 4: Blues For Your Soul, a stunning collection of blues and soul classics plus one original song produced by Joe Bonamassa, who contributes mesmerizing guitar solos on four tracks, alongside longtime collaborator Josh Smith. S.O.S 4: Blues for Your Soul is the latest entry in Broussard’s ongoing philanthropic album series available on March 3 via Bonamassa’s own Keeping the Blues Alive Records.

“Tackling Little Milton was a daunting task,” Broussard admits. “He had an epic voice that was intimidating to attempt. I only hope I did him justice. I didn’t want to overdo it, but we wanted to put our stamp where it needed to be. I’m so glad we did.”

“That’s What Love Will Make You Do” keenly exemplifies the roots music fireworks that the burning teamwork of Broussard-Bonamassa creates on S.O.S. 4: Blues for Your Soul which quite possibly is Broussard’s best album to date. Each of the twelve tracks speak to the deepest part of the soul, whether it’s Son House’s “Empire State Express,” Johnny “Guitar” Watson’s “Cuttin’ In,” Bobby Blue Bland’s “I’ve Got to Use My Imagination” to Howlin’ Wolf’s “I Asked for Water” and the sole Broussard original, co-written with Josh Smith and Calvin Turner, “When Will I Let Her Go.” S.O.S. 4: Blues for Your Soul is a remarkable achievement and provides a captivating showcase for Broussard’s muscular and passionate singing.

For Marc Broussard, this album is another soul-stirring adventure into the music he’s always admired. “Blues is something in my wheelhouse,” he says, “But it’s not really my field of expertise.” But when he decided blues would make up a big part of the new addition to the S.O.S. series, he knew whom to ask for assistance: Joe Bonamassa. “I couldn’t think of a better person than him. I reached out directly to Joe, and he jumped at it. It was just that easy. It’s a real complementary relationship, that’s for sure,” he says. “We got into the studio, and it worked immediately.”

Produced by Bonamassa and Josh Smith, Marc Broussard has achieved something that has all the elements of a classic album, one that arrives with a knockout punch and will likely grow even more luminous over the years. With special guests like Bonamassa, Smith, Roddie Romero, Bobby Junior, JJ Grey, Eric Krasno, and old pal Calvin Turner, it is a real-life gathering of an esteemed musical tribe. Created with an idea for raising funds to help our country’s underprivileged youth, S.0.S. 4: Blues for Your Soul delivers great music for a great cause. Thanks to the generosity of Marc Broussard, a significant portion of proceeds from this Save Our Soul Album will be donated to Keeping the Blues Alive Foundation for the purpose of supporting youth rehabilitation through music! This includes a partnership with Guitars Over Guns, a Miami-based nonprofit which offers students from the most vulnerable communities a powerful combination of music education and mentorship.

“The deep, mutual concern and compassion for providing healing and growth opportunities for young adults through music is what connects all of us in this endeavor. Thanks to Marc, many students in Miami-Dade County will receive mentorship, recording time, and resources that they likely wouldn’t have access to in another capacity. We are so excited to be a vessel for this initiative and we’re fortunate to have an opportunity to work with Marc and Guitars Over Guns whose impact is already being noticed, rewarded, and replicated across the country.” – Shawn Gonzalez, KTBA Foundation President.

“I’m really proud of all the S.O.S albums,” Broussard states. “But this one, in particular, seems really fantastic because we have some extra strength with my pal Joe Bonamassa. His stepping in by producing, playing on the record plus releasing it on his label is truly a gift. And Joe completely understood the charitable aspect of the album.”

With help from so many talented friends, this is blues that arrives right on time and is guaranteed to take the soul on a new excursion. “This album seems like the culmination of a process that started when I went independent,” says Broussard. “It’s based on believing in myself and the music my fellow musicians, and I make. I couldn’t be more excited.”

S.O.S 4: Blues For Your Soul also spotlights Broussard’s long-running involvement in charitable endeavors. S.O.S. (Save Our Soul) is his ongoing series of benefit albums that support a different cause for each album. Broussard explains. “I started doing cover records after I was released from my very first contract with a major label. I finally went independent and decided to record albums to raise funds for charity. The first of those projects was to raise money for a homeless women’s and children’s shelter. Second, we did an album to raise funds for a children’s hospital in Baton Rouge, Louisiana.”

bluestownm
•
Follow
Single I Ben Reel – Don’t Fight It Baby It will be the 1st single of 3 to be released from a brand new studio album. https://www.bluestownmusic.nl/single-i-ben-reel-dont-fight-it-baby/
View on Instagram |
4/9