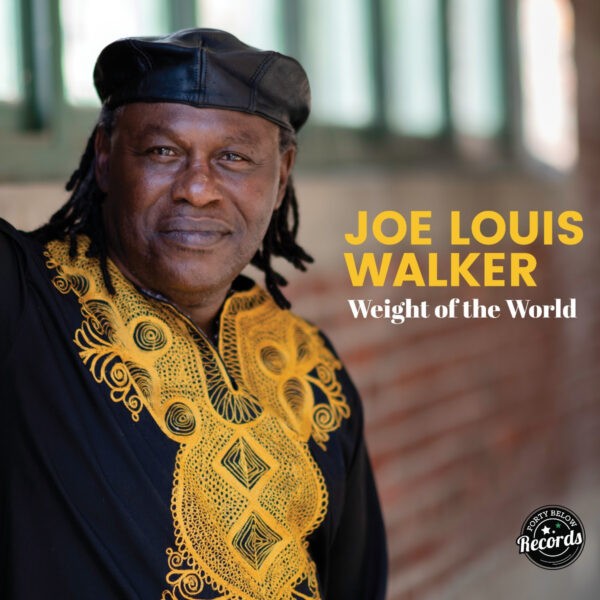 On February 17th, Forty Below Records will release ‘Weight of the World’, the new album by award-winning Blues and Roots musician Joe Louis Walker. The first single and title track will be premiered by American Blues Scene on Wednesday, October 19th, and released to all digital streaming platforms on Friday, October 21st.

A Blues Hall of Fame inductee and six-time Blues Music Award winner, NPR described Walker as “a legendary boundary-pushing icon of modern blues.” His 2015 release, Everyone Wants a Piece, was nominated for the Contemporary Blues Grammy. In addition, Walker dueted with B.B. King on his Grammy Award-winning Blues Summit album and played guitar on James Cotton’s Grammy-winning album Deep in the Blues.

Recorded with Producer Eric Corne (John Mayall, Walter Trout, Sugaray Rayford), Weight of the World showcases the depth of Walker’s influences and the prowess with which he commands different genres; be it Soul, “The Weight of the World,” “Is it a Matter of Time,” “Don’t Walk Out That Door,” Gospel, “Hello, it’s the Blues,” Funk, “Count Your Chickens,” New Orleans 2nd line, “Waking Up the Dead,” Indie Blues “Root Down,” Rock N Roll, “Blue Mirror,” Contemporary Blues, “Bed of Roses,” or Jazz, “You Got Me Whipped.”

It’s a compelling album that displays a master at the height of his game. They say Roots musicians age like fine wine, which certainly rings true with Walker. Weight of the World is a resounding statement and quite possibly the beginning of the most remarkable chapter of a storied career.

The title track is a metaphor for the times we live in. “Out here at the edge of the world / It’s starting to curl / We’ve upset the big shareholder.” As the pandemic lingers on, the cost of doing business rises, and global temperatures soar, musicians like Walker have felt the impact as much as anyone.

Another standout track, “Hello, it’s the Blues,” portrays a virtual conversation between the Blues in the form of a guardian angel and the listener, “I’ve been here all the time, in your heart and in your mind.” The track features a breathtaking string arrangement by Eric Gorfain (Neil Diamond, Roseanne Cash, Dionne Warwick,) a riveting nylon string guitar solo, and moving Gospel-influenced vocals with Gia Ciambotti (Joe Walsh, Bruce Springsteen.)

Walker’s “Is it a Matter of Time” and “Don’t Walk Out That Door” are classic Stax/Hi Records style songs with beautiful harmonies and punchy horns over Walker’s brilliant harmonic changes and deft guitar playing. Corne counters with two sharp-tongued numbers, “Waking Up the Dead” and “Count Your Chickens.” The former is driven by a propulsive 2nd Line meets Bo Diddley groove with a snaking slide guitar seemingly representing the song’s main character.” It’s masterfully written,” says Walker. The latter is a fox in the henhouse tale of warning with a smoking funk arrangement by Walker and his sneaky great band.

Walker’s output spans the gamut of American Roots music, and he is regarded as one of his generation’s greatest bluesmen. Billboard found that his playing “blows all over the map…gutbucket blues, joyous gospel, Rolling Stones-style rock crunch, and aching R&B. Walker’s guitar playing is fine and fierce.”

A brilliantly lyrical guitarist, soulful singer, and prolific songwriter, Walker has toured extensively throughout his career, performing at some of the world’s most renowned music festivals, such as Glastonbury and Montreux, as well as on national television, with appearances on Late Night with Conan O’Brien, The Don Imus Show and Later With Jools Holland in the UK, earning him a legion of dedicated fans along the way.

Walker has recorded with Ike Turner, Bonnie Raitt, Taj Mahal, and Steve Cropper, opened for Muddy Waters and Thelonious Monk, hung out with Jimi Hendrix, Freddie King, Mississippi Fred McDowell, and was a close friend and roommate of Mike Bloomfield.

Walker’s 1986 debut album Cold Is the Night on HighTone announced his arrival in stunning fashion, and his subsequent output for Verve, Alligator, HighTone, and others only served to further establish Walker as one of today’s leading bluesmen. The New York Times raved, “Walker is a singer with a Cadillac of a voice. His guitar solos are fast, wiry, and incisive, moaning with bluesy despair.” Rolling Stone called him “ferocious.”

A myriad of organizations have recognized Joe for his achievements. He’s a member of the Blues Hall of Fame, was named a USA Fellow by United States Artists, won multiple W.C. Handy Awards and Blues Music Awards, has been a recipient of San Francisco’s prestigious Bammy Awards, and was also awarded a lifetime achievement award from the Mississippi Valley Blues Society.

Referred to as “A musician’s musician,” Walker has earned his rightful place among the pantheon of legendary electric blues singer/guitarist/songwriters like B.B. King, Buddy Guy, and Robert Cray. Herbie Hancock called Walker “a national treasure.” Chick Corea glibly referred to him as “The Chick Corea of Blues,” and Aretha Franklin called him “The Bluesman.”

There is no shortage of praise; Blues Revue calls Walker “one of contemporary blues’ most dynamic and innovative. musicians release consistently exciting, soulful, heartfelt, and spellbinding music.” Living Blues stated, “His fretwork is indelibly stamped with his trademark blend of emotional heat and impeccable precision. Even at his most flamboyant, Walker sounds like he’s playing ideas, not just notes.”