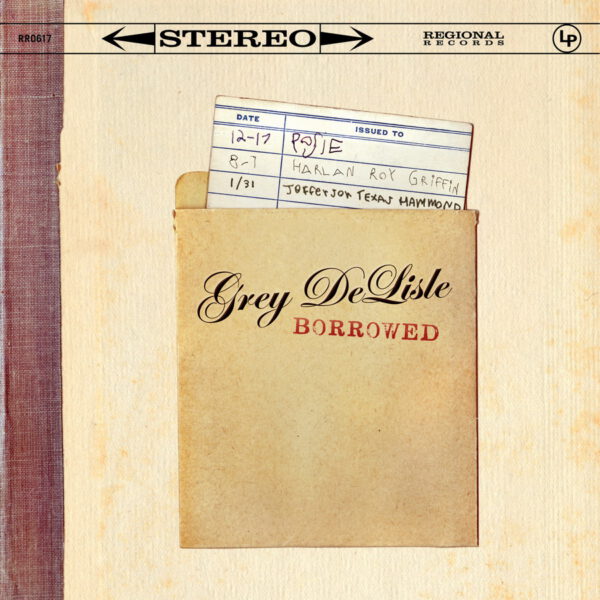 From the opening track, ‘Another Brick in the Wall’ to ‘Georgia on My Mind’ (featuring Willie Nelson’s harmonica player Mickey Raphael), Borrowed, a covers album, spans the record store aisles in Grey DeLisle‘s heart.

The bonus track, ‘Willie We Have Missed You’, was previously released on the Grammy Award-winning Stephen Foster Beautiful Dreamer CD compilation.

Peter Jesperson (producer of The Replacements):
“The care that has been put into the singing and the general creation of this album is extraordinary. Whether it’s interpreting a James Bond theme, breathing new life into a Stephen Foster standard, or reinventing a T. Rex song, Grey’s voice is a wondrous and versatile instrument. This is the sound of expert music makers.”

And from Tammy Rogers, Grammy Award-winning co-founder of The SteelDrivers, who arranged and performed the strings on ‘Another Brick in the Wall’ and appears throughout Borrowed…

“Grey Delisle has created one heck of a covers album, and I personally, am so proud to have been involved in its creation!

“Her voice is at once so intimate but powerful, and she uses it to perfection on each of these tracks… It’s like she’s inviting you to a private performance with each song.

“Standout versions for me are her inventive take on ‘Another Brick in the Wall’ and her hushed rendition of ‘Georgia on My Mind.’

“Marvin Etzioni perfectly produces to highlight Grey’s unique musical vision. They are a match made in musical heaven.

“I hope this record introduces the world to Grey’s awesome talent!”

Grey DeLisle is a singer-songwriter and autoharp player (think Sara Carter of the Carter Family). Fans and journalists alike have rightfully compared DeLisle to Loretta Lynn and Tammy Wynette.

DeLisle will shortly be releasing her first solo album in over fifteen years – “makin’ babies instead of makin’ records”, said DeLisle, who elaborates…

“I’ve spent the last 15 years making people so I took a break from making music.

It’s so strange but ever since I became pregnant with my first child the songs just went away. I used to write a new song almost every week but I suppose all of my creative energy was being directed into my babies.

When the pandemic hit and I was home for an extended period of time, my brother and I started playing covers of our favorite songs at night and uploading them to social media. I hadn’t played my autoharp more than a handful of times in years….and all of a sudden…it was like tapping into a spring. The songs just started flowing. I know this is a record of covers….but there are over 100 brand new songs coming. It’s about time.”

DeLisle teamed up again with Etzioni to produce the all covers album aptly titled Borrowed. The digital version of the album will be available on Hummin’ Bird Records with the forthcoming physical releases (CD/Vinyl) due for release on Etzioni’s Regional Records imprint.

DeLisle is already back in the studio with Etzioni working on an all-originals album slated for release later in 2023.

Grey DeLisle was born and raised in San Diego and is of Mexican-Irish descent. Grey’s grandmother, Eva Flores Ruth, was a vocalist who performed with legend Tito Puente; she even makes an appearance at the end of Homewrecker’s ‘Usted’, a Latin standard that Ruth used to sing.

DeLisle’s other calling? She is the most prolific voice actress in American animation history, having performed over 2000 cartoon voices since 1996, from The Simpsons to Scooby Doo.

Grey DeLisle is a one-of-a-kind artist.