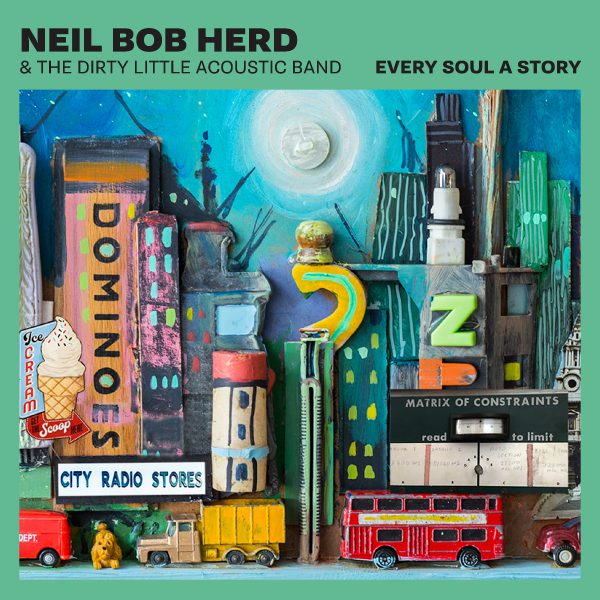 ‘Every Soul a Story’ is the debut solo album from Neil Bob Herd, formerly guitarist / vocalist / songwriter in the acclaimed “alt Bluegrass” band, The Coal Porters.

Adding a little more twang and electricity to the ‘Porters acoustic palette, the same songwriting acumen, wry humour and sideways observation of the human condition is very much in evidence. As the title suggests, ‘Every Soul a Story’ features a cast of real and invented characters pondering faith, reincarnation, betrayal, hope and plain old “getting friendly”.

Songs as stories is a recurring theme, from the rural idyll gone south of ‘Bad Land’, to the elegiac WW1 lilt of ‘Colour of History’, via the brotherly affection of ‘Leave Only Love (Old Dog)’ and ‘Coming Back as Jason’ to the laconic romance of ‘Exactly What I Wanted’ and the idealistic longing of ‘Light a Single Candle’.

Other highlights include the almost titular ‘Book Inside Them’, the time travelling satire of ‘Well, Well’ and the headstrong rocking love-rush of “As Much As I Need To’ and ‘Best Song’.

Bio
Although Neil Bob Herd may be familiar as guitarist / vocalist with Alt. bluegrassers The Coal Porters, he also steps out as a solo act, performing original material in the roots/Americana vein, but with a distinct brogue – some years ago the venerable Proclaimers convinced the young NBH that he should sing in a geographically non-specific Scots accent.

Having played in a selection of Scottish outfits, he came to London and hooked up with various acts on the busking / alternative cabaret scene, spent a few years as “Scots Billy Bragg” before deciding to focus on music after an unnamed Scottish comedy producer unwisely suggested abandoning the guitar…. forming pre-grunge power trio Handsome.