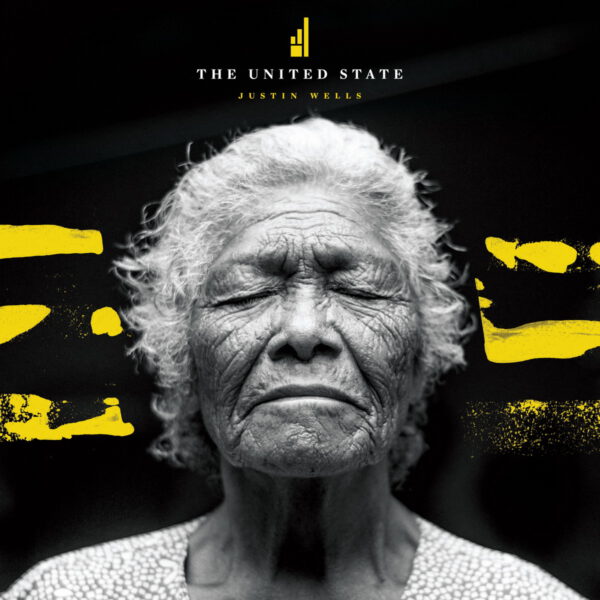 “This record starts in the womb, and it ends after death,” says Justin Wells. “Each song is the soundtrack to a different phase of our shared human experience.”

If finding common ground sounds like an ambitious prospect in these profoundly polarized times, that’s because, quite frankly, it is. But with his extraordinary new album, The United State, Wells has managed to transcend politics and race and religion and tap into something far deeper, something infinitely more primal and timeless. Recorded with acclaimed producer Duane Lundy (Ringo Starr, Sturgill Simpson’s Sunday Valley, Joe Pug), the collection explores our innate humanity and everything that comes with it: the joy, the sorrow, the ecstasy, the pain, the hope, the fear. Wells’ songs speak to the universal truths that bind us, empathetically leaping between perspectives as they reckon with personal growth and existential quandaries. The arrangements here are rich and ethereal to match, balancing lush sonic landscapes with stark acoustic meditations. The result is a subtly revelatory record, a gripping, cinematic album full of small moments and sharp insights that add up to nothing short of life itself.

“Ultimately, this album’s about unity,” says Wells. “It’s about the common thread that connects us all.”

After spending his childhood in Blanchard, LA, Wells moved with his family to Kentucky as a youngster. Growing up in the rural South, he rebelled against the commercial country music that surrounded him, instead preferring the trippy psychedelia of Pink Floyd and the brash energy of Guns N’ Roses. After a false start at college, he relocated to Lexington, where he launched the cult favourite Southern rock band Fifth on the Floor. The group released a pair of well-received independent records before teaming up with Shooter Jennings on their breakout third album, 2013’s Ashes & Angels, which debuted on the Billboard Country charts. While the record earned raves and helped land the band dates with the likes of Chris Stapleton, Sturgill Simpson, Jason Isbell, and Blackberry Smoke, it would prove to be the group’s last, and following a pair of hometown farewell shows, the four-piece split for good.

“When that band broke up, it was really hard on me because I felt like we were at the top of our game,” says Wells. “I’d been chasing that dream since high school, and all of my eggs were in that basket. There was no backup plan.”

With the rug suddenly pulled out from under him, Wells found himself in freefall. Rather than succumb to the disappointment, though, he decided to write his way through the heartache, emerging stronger and more creatively invigorated on the other side with his solo debut, Dawn in the Distance. The record (and its subsequent touring) prompted the best reviews of Wells’ career, with Rolling Stone hailing his “gift for melody” and Saving Country Music praising his “stunning insight and honesty.” The album reached #3 on Amazon’s Alt-Country/Americana chart, and songs from the collection racked up more than a million streams on Spotify alone.

When it came time to work on a follow-up, Wells decided to flip his entire writing process on its head. Instead of penning whatever music just happened to come to mind, he crafted an entire architecture and sequence for the record in advance, following it like a roadmap as he wrote about what it meant to be human, to be caring, to love yourself and your fellow man, flaws and all.

“I found myself thinking about all the tribalism going on right now,” says Wells. “Everything feels so divided, but if you zoom out, you see that we all bleed the same, we all laugh the same, we all cry the same. There’s this common path that all of our lives follow: birth, being a dumbass kid who thinks you know it all, realizing that you don’t know it all, thinking you’re falling in love, actually falling in love, starting your own family, worrying about paying the bills, death, and whatever comes next.”

Writing the album was a slower and more deliberate process than Wells had ever experienced, and the recording sessions unfolded in a similarly methodical fashion. After brothers Daxx (Cheap Trick) and Miles Nielsen (Miles Nielsen and The Rusted Hearts) laid down rhythm tracks in Rockford, IL, Wells and Lundy cut vocals and guitars in Lexington with Laur Joamets (Sturgill Simpson, Drivin’ N Cryin’) and Alex Muñoz (Margo Price, Nikki Lane). GRAMMY-nominated producer, engineer and multi-instrumentalist Justin Craig, meanwhile, contributed additional guitar and percussion parts from his New York City studio, and a slew of Wells’ friends and collaborators joined forces to help put the finishing touches on things back in Kentucky.

“My name is on the cover,” says Wells, “but a community made this album.”

That communal spirit is the heart and soul of The United State, which nods to our shared humanity with a stark, black and white portrait of an elderly woman on the cover, a lifetime of struggle and resilience and heartbreak and love etched in the lines on her face. After opening with an ethereal instrumental movement that radiates all the warmth and safety of the womb, the collection begins in earnest with ‘The Screaming Song’, a bittersweet meditation on the wonder and the terror that accompanies our entrance into this world. “It won’t be the last time I am on my own,” Wells sings in his rich, honeyed drawl, at once capturing both the infinite beauty and unfathomable sadness that awaits each of us at birth. While the record works its way through life chronologically, it’s not one continuous story, but rather a series of snapshots of formative moments from a variety of narrators connected by their shared humanity. ‘No Time For A Broken Heart’ recalls the playful country funk of ‘Cripple Creek’ as it celebrates the freedom of youth, while the tender ‘Some Distance From It All’ taps into the eternal teenage quest for independence and identity, and the boisterous ‘Never Better’ learns the difference between lust and love the hard way.

As exuberant as side one is, there’s a distinct maturing on the album’s second half, which finds adolescence giving way to adulthood. The soulful ‘After The Fall’ and R&B-tinged ‘It’ll All Work Out’ revel in the power of grown-up love, while the breezy ‘Temporary Blue’ and driving ‘Walls Fall Down’ reflect on the growth and responsibility that come with raising a family of your own, and the hypnotic ‘Ruby’ and dreamy ‘The Bridge’ approach death with a calm acceptance, passing peacefully from this life to the next. “On my own, on my own, ’til I see you again, I am on my own,” Wells sings, bringing the whole journey full circle.

“Birth and death, they’re not the beginning and the end,” he muses. “They’re both just transitions from one thing to the next. I think there’s comfort in that.”