The GUITAR MAN documentary is available to pre-order HERE.

From average Joe by day to guitar hero at night, GUITAR MAN tells the incredible rise of blues-rocker Joe Bonamassa, whose hard work and determination have made him one of today’s top-selling blues artists. With more #1 Blues albums than anyone else in history, Bonamassa pulls back the curtain on his incredible career, allowing us to see his remarkable musical achievements and pioneering style. Featuring behind the scenes interviews and live concert footage showcasing some of the biggest names in music, kick back and enjoy the exhilarating soundtrack of his phenomenal life.

GUITAR MAN showcases Bonamassa’s astounding talent from his childhood as a “wunderkind” discovered and mentored by Blues legend B.B. King. At the age of only 43, Bonamassa has an illustrious career spanning over three decades. Through highs and lows, Joe persevered, taking his musical journey into his own hands to overcome challenges and reach his goals. In 2009, Bonamassa fulfilled a lifelong dream of playing at the prestigious Royal Albert Hall and was joined on stage by Eric Clapton, marking a pivotal moment that elevated his music to the next level.

Filled with an abundance of music, live concert footage, and interviews with music industry legends, GUITAR MAN chronicles a musician growing in his craft, traveling the globe, collaborating with top artists from across the world of music, and ascending to the heights of inevitable success. 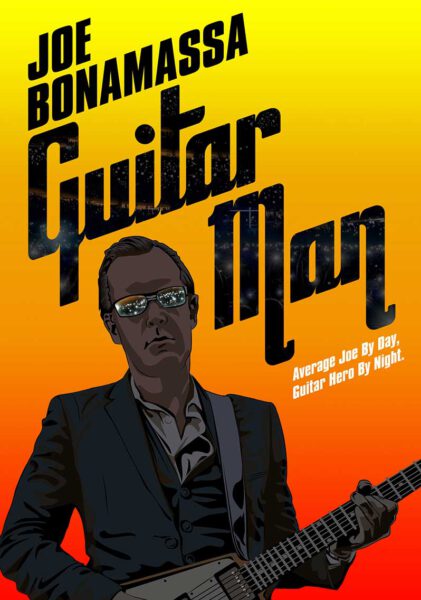 In addition to having this exciting film release, Joe just landed his 24th #1 with his latest studio album Royal Tea which was recorded at the legendary Abbey Road Studios and shows off Joe’s fiery guitar playing and incredible songwriting in a whole new way. It is also worth mentioning that Bonamassa has done a lot for artists during COVID-19 through his Non-Profit’s Fueling Musicians program, raising $375K thus far and giving it to 225+ touring musicians whose livelihoods have been halted.

About Joe Bonamassa
As a professional musician for over 30 years, Joe Bonamassa continues to blaze a remarkably versatile artistic trail, and amass an authentic, innovative and soulful body of work. Bonamassa’s career began onstage opening for B.B. King in 1989 when he was only 12 years old. Today, he is hailed worldwide as one of the greatest guitar players of his generation and is an ever-evolving singer-songwriter with over 30 albums to date all under his own label, J&R Adventures. He founded and oversees the non-profit Keeping The Blues Alive Foundation. Bonamassa has received two GRAMMY® nominations, and recently achieved his 22nd #1 Billboard Blues Albums (more than any other artist) with the release of LIVE AT SYDNEY OPERA HOUSE in 2019. While touring is on hiatus, Bonamassa has been staying busy by releasing new singles from his upcoming studio album, starting a brand new video interview series on Facebook called “Live From Nerdville” and promoting the Fueling Musicians Program to help those in need.Jbonamassa.com

About Keeping the Blues Alive Foundation
Keeping the Blues Alive® Foundation is a 501(c)(3) non-profit organization founded by two-time GRAMMY-nominated blues-rock artist Joe Bonamassa and his long-time manager Roy Weisman. KTBA fuels the passion for music by funding projects and scholarships to allow students and teachers the resources and tools that further music education. Since its inception in 2011, KTBA has funded music programs and initiatives affecting 70,000+ students in all 50 states. This is accomplished by making weekly donations to music projects in schools, as well as funding merit-based scholarships and extracurricular programs all over the country. Through donations totaling nearly $1,000,000 from fundraisers, sweepstakes, merchandise sales, and our biannual blues festival at sea, KTBA has been able to keep all too vital music education as well as other programs thriving. ktba.org

Due to the impact of COVID-19, Joe Bonamassa and Keeping the Blues Alive Foundation launched the Fueling Musicians Program, which has to date raised more than $295,000 to help support more than 160 musicians in need during these challenging times by providing immediate cash payments of $1,000 for essential living expenses, as well as pre-paid gas cards of $500 and $50 Guitar Center gift cards to help them stay afloat and get back on the road again when it is safe. “The more money raised means more musicians will receive funding to help them get through these challenging times and ultimately back onto the road when the time is right,” Bonamassa says. On May 31, he launched an online Stream-A-Thon benefit for the program, featuring over FIVE hours of music performances from over 50 musicians including some legendary friends and talented rising stars. The full concert event can be streamed in here.

Individuals or organizations interested in helping Joe support this program should go to the Keeping the Blues Alive website, ktba.org or ktba.org/fueling-musicians.

Recensie: The Northern Belle – We Wither, We Bl