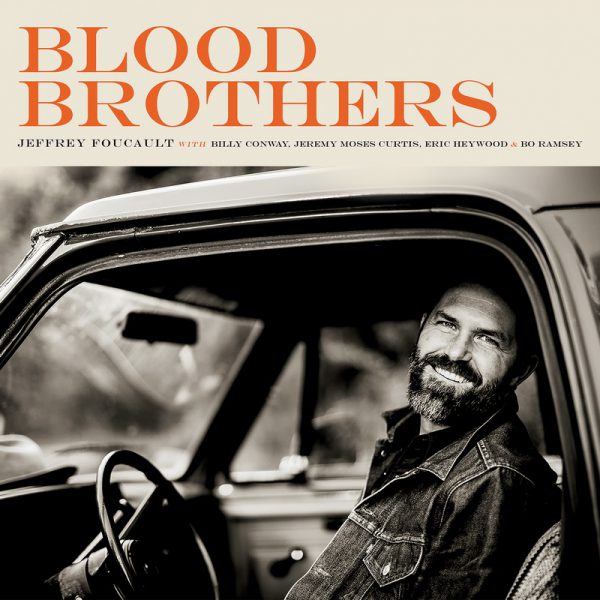 ‘BLOOD BROTHERS’, the much-anticipated follow-up to Jeffrey Foucault’s critically acclaimed 2015 album Salt As Wolves (“Immaculately tailored… Close to perfection” – New York Times; “Pure Songwriter, simple and powerful” – Morning Edition, NPR) is a collection of reveries, interlacing memory with the present tense to examine the indelible connections of love across time and distance. The poet Wallace Stevens wrote that technique is the proof of seriousness, and from the first suspended chord of ‘Dishes’ – a waltzing hymn to the quotidian details of life, which are life itself (‘Do the dishes / With the windows open’) – Foucault deftly cuts the template for the album as a whole, showing a mastery of technique as he unwinds a deeply patient collection of songs at the borderlands of memory and desire.

In two decades on the road Jeffrey Foucault has become one of the most distinctive voices in American music, refining a sound instantly recognizable for its simplicity and emotional power, a decidedly Midwestern amalgam of blues, country, rock’n’roll, and folk. He’s built a brick-and-mortar international touring career on multiple studio albums, countless miles, and general critical acclaim, being lauded for “Stark, literate songs that are as wide open as the landscape of his native Midwest” (The New Yorker), and described as “Quietly brilliant” (The Irish Times), while catching the ear of everyone from Van Dyke Parks to Greil Marcus, to Don Henley, who regularly covers Foucault in his live set. BLOOD BROTHERS is the sixth collection of original songs in a career remarkable for an unrelenting dedication to craft, and independence from trend.

A departure from the austere electricity of his last outing, BLOOD BROTHERS sets blues aside to pull together strands of country, R&B, gospel, rock’n’roll, and folk in a series of delicate small-canvas portraits. There’s a touch more light coming through the window, a certain gentleness in play, with layers of backing vocals sung by women – including Foucault’s wife Kris Delmhorst, as well as the various partners of the band – adding hue and shade.

‘War on the Radio’ – a jangling rocker built on a Stars ‘n’ Bars-style fiddle line carried by pedal steel and electric guitars – uses bright major chording reminiscent of Foucault’s 2006 album Ghost Repeater, as it remarks the complicity at the heart of modern American living (‘Just lie back and close your eyes / Listen to the war on the radio’). The hushed intensity of ‘Blown’ – a duet with Grammy-nominated songwriter Tift Merritt – plumbs the nature of dislocation against lines of brooding steel and cello, while the title cut, written together with drummer Billy Conway (and embroidered here by the near-transparent lilt of Iowa’s Pieta Brown) details the sharp ache of lost love (‘How could I know that I would live through / My life haunted by your sad smile?’). Rounding out the A-side, ‘Little Warble’ memorializes the day a love affair ends, from the vantage of twenty years past, in a quiet elegy of surpassing beauty. The intimate acoustic guitar duet ‘Pretty Hands’ – which sees Foucault joined by the Milk Carton Kids’ Kenneth Pattengale on lead – closes the album with a lovely, spare poem of knowing and being known, a meditation on the nature of marriage.

Jeffrey Foucault was 17 when he learned to play all the songs on John Prine’s eponymous debut on his father’s mail-order guitar, spending long evenings in his bedroom spinning piles of old records on a hand-me-down turntable, lifting the needle to transcribe every line of ‘Desolation Row’. At 19 he stole a copy of Townes Van Zandt: Live and Obscure from a friend, and a few years later, having quit school to work as a farm-hand and carpenter Foucault began writing the songs that became his first album (2001’s Miles From the Lightning). Since then he’s been everything from solo country-blues troubadour to frontman for a six-piece rock ‘n’ roll band, along the way compiling a discography notable for its visceral power and complex poetics. Yet it wasn’t until he paired with drummer Billy Conway (Morphine) that the final piece fell into place and Foucault found the Luther Perkins to his Johnny Cash, the truly sympathetic collaborator to frame and fire his terse brand of Americana.

Since 2013 Foucault and Conway have toured across the United States and overseas together, refining a primal, stripped-down stage show: two men, two chairs; a beat-up Gibson J-45 and an electric guitar tuned low and played through a 5-watt amp; a suitcase kick drum, a low-boy cymbal, a snare drum. The pair plays only what they can carry into the club alone in one trip, covering all the territory from blues and country, to rock ‘n’ roll and folk with a laconic ferocity and timeless cool. Their dynamic partnership – as nimble as it is sonically powerful – is the bedrock on which BLOOD BROTHERS builds its nuanced and poignant lament.

Cut live to tape in three days at Pachyderm Studios in rural Minnesota, BLOOD BROTHERS reconvenes Salt As Wolves’ all-star ensemble: Conway on drums, Bo Ramsey (Lucinda Williams) on electric guitars, and Jeremy Moses Curtis (Booker T) on bass, joined this time by pedal steel great Eric Heywood (Pretenders) to unite in the studio both iterations of the band with which Foucault has toured and recorded for over a decade. Charting a vision of American music without cheap imitation or self-conscious irony, the ensemble deploys an instinctive restraint and use of negative space, an economy of phrase and raw simplicity that complement perfectly Foucault’s elegant lines and weather-beaten drawl.

As noise and politics, fashion and illusion obtrude on all fronts, BLOOD BROTHERS takes a deep breath and a step inward, with tenderness and human concern, paying constant attention to the places where the mundane and the holy merge like water. In language pared to element, backed by his world-class band, Foucault considers the nature of love and time in ten songs free of ornament, staking out and enlarging the ground he’s been working diligently all the new century: quietly building a deep, resonant catalogue of songs about love, memory, God, desire, wilderness, and loss.