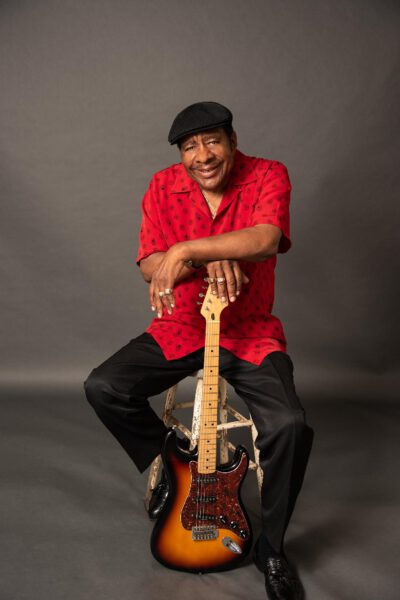 Now nearing eighty years of age, North Carolina soul-bluesman Roy Roberts looks back over a career that started as a kid, with a guitar to catch the women and to free him from a life working the family farm. We hooked up on the verge of a new release, the first in some time, to chat with an old friend.

When Greensboro, North Carolina soul-bluesman Roy Roberts was just a kid he tried piano lessons for a while but just couldn’t suffer the indignity of it all: “I’d be sitting playing and it felt sort of ‘……a girls thing’ to me, If you know what I mean. It was just cissified, I guess,” Roy laughs and adds, “I’d be able to hear my buddies outside in the yard playing and hollering, having a great time. So I gave that up,’ he explains.

A few years later, however, the young, budding musician discovered guitar, taught himself how to play and was out on the road gigging, a jobbing musician with a hunger to learn and develop as fast as he could.  “I think I was about 18 years old when I went out on the road,” he recalls, “playing with Stevie Wonder, then known as Little Stevie Wonder.”

Roberts recalls getting his first guitar from the famous Sears catalogue when he was about 16 years old: “I’d been to a few clubs and I’d heard that Elvis stuff, and Chuck Berry. I saw the guitarists were always picking up the women. They had no worries on that score and I wanted some of that. So guitar it was. I think it cost something like fourteen bucks back then. I had a buddy who could play a bit, knew some licks, and he helped show me some chords and we got together. When the guitar arrived, the mailman had it. I was working out in the fields and I saw him come, he called and I ran across to get the package. I was so pleased.”

And Roberts was still a young guy when he first met up with a guy who was to become his professional music mentor, taking him under his wing and teaching him the musical ropes – the late Solomon Burke.

“I joined Solomon’s band and he sure took good care of me.  I was always, and remain, the kind of guy who plays what is wanted of me. I don’t do none of that ‘…..I only play what I want to play stuff,’  like lots of the guys around these days. If they’re paying, they get to call the shots,” he says, with an evident disdain for the shameless self-promotion of many younger sidemen and band-members these days.

“I was playing guitar with Solomon. He liked to have the band open for him, with a singer, and then after a few numbers he’d come out – a grand entrance – and come up on stage. One night, the guy who usually sang didn’t show up, he’d been drinking  or something like that. Solomon went round the band and they all said ‘No, not me, I can’t sing boss.’ He came to me and I gave in. I was no singer then, real rough, but I thought I could give it a go. And half-way through he appeared from his dressing-room and smiled, waved me on to keep going..”

This was to prove a turning point in Roberts’ career, giving him the confidence to continue up-front each night and develop his skills and confidence.

For some time, Roberts also played and worked with Eddie Floyd. He also worked on a number of occasions with the late Otis Clay and indeed talked with Clay a few short months before he passed in January 2016. And having worked most of the local clubs and venues in his home-state, Roberts became known as a powerful, reliable professional who could be trusted and relied on to produce the musical goods when needed, a trait that resulted in him playing, touring and working with one of soul music’s truly legendary greats, Otis Redding.

“Otis came through Greensboro and played the club I was then working with a house band. We got on real well and he liked my playing and approach. At the time he had a huge hit record out, ‘These Arms Of Mine’, and I backed him so he took me out on the road with him. He was a great guy, always respectful and understanding.  We were good buddies. I was real cut-up when he passed.”

That was in 1967 and following Redding’s death, Roberts decided to try going it alone for a few years, releasing a handful of single 45s  – and being ripped-off by his then management, leading to him taking a bit of a break in late 1969. “I sat back and considered the future. Best thing I done. I opened my own record company and took control of my own stuff, with my own recording studio. I became a sort-of one-man-band, in effect. It means if you get it right – that’s great. But, if you get it wrong, you can’t go blaming nobody else. I guess I’ve got something right cause I’ve about 17 or 18 albums out so far.” 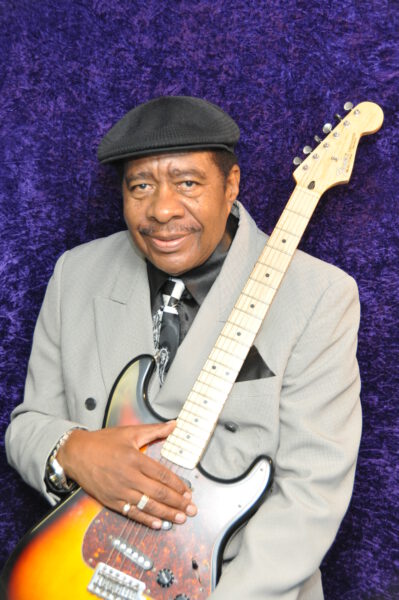 Roberts also knew and worked with BB King way back in the day, a memorable experience he still treasures: “BB was a real old-fashioned gentleman, great to play alongside and know,” he says with an admiring shake of the head.

When the talk turns to more current, modern bluesmen, Roberts is scathing at times. Never a great fan of Robert Cray, for example, he reckons the guy has grown too big way too fast, acknowledging the importance of Clapton – who he has also shared billing with in the past in the USA – in the generation and development of Cray’s musical persona and undeniable popularity. Tedeschi Trucks, on the other hand, he admires and enjoys on a personal level.

Roberts describes himself as being ‘…..a road man.’ “ I’ve been over 55 years out on the road. It can get kinda tiresome but I’m used to it by now. We take to the road with gigs covering all over the USA. Sometimes it means driving for 20 hours at a time. But I can still do that stuff and often take the wheel for up to sixteen hours at a stretch myself.” This despite now approaching eighty years of age, as he confides with his customary warm laugh.

Currently in the process of cutting a new album – it’s in the bag but still to be mastered and should drop around end of April  – Roberts confirms he still loves that old traditional soul sound, the Memphis Stax sound, with full-on horns in the mix: “You just gotta move when you hear that music,” he laughs. And having caught the man in action live a few times in recent years and when for the second time he played Cognac Blues Festival in France, that is exactly what he does.

When I comment on how he ‘works the house and audience,’ he beams with clear pleasure, confirming that was one of the professional tricks he learned from Solomon Burke, himself a past-master in the field.: “I used to watch Solomon in action and I thought to myself, ‘that’s what I want to do…’  He had the crowd eating out of his hand. He grabbed them and kept them with him till the moment he walked from the stage. He was my favourite. I learned so much from him. The trick is to keep them with you all of the way, to keep it always moving. You just gotta always roll with the flow. I love making people happy. I’m just an old bluesman, I guess. Gonna be that till day I die. At the end of the day we’re all just passing through!”