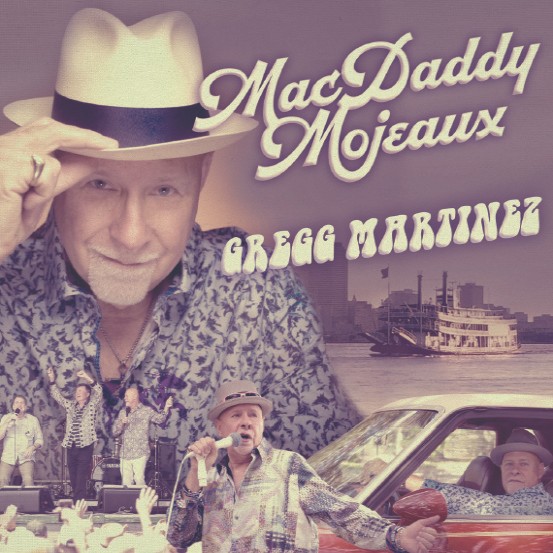 Front man, vocalist and trumpeter Gregg Martinez (pronounced MartNEZ – the i is basically silent) earned his moniker “Mac Daddy” early in his five-decade-long career as the leader of the King Fish, The Heat, The Boogie Kings and now Gregg Martinez and the Delta Kings. His sparkling tenor and powerful vocal style were inspired and influenced by the Soul crooners of the 60’s and 70’s including Sam Cooke, Marvin Gaye, Al Green and fellow Louisiana artists G.G. Shinn, Luther Kent, and Johnny Adams. His music combines New Orleans style R&B, with Philly and Memphis Soul and Texas Swing into a churning gumbo sound that traces its roots to the Acadiana region of southern Louisiana and southeast Texas affectionately called Swamp Pop.

Solidifying his role as one of the leading purveyors of the style, Martinez is set to release his 12th album, “MacDaddy Mojeaux,” just in time to fuel a fais do-do on a sizzling summer night. The thirteen fresh tracks are a spectacle of love and devotion recorded by Grammy-winning engineer Tony Daigle together with some of the hottest musicians in the south including a full horn section and special guests Sonny Landreth, Rockin’ Dopsie Jr, and Charlene Howard. The album adds to his mystery as the “maqereau” (a man the Creole believe has an unusual power over women) by conjuring the collection of songs into his “Magic Charm” and then fancifully spelling it out as his “Mojeaux,” eluding to the suave, charmant, and sophistiqué ingredients in this “Le Philtre D’Amour.”

The opening number takes full of advantage of all those elements on an energized reading of the Donny Hathaway arrangement of the Ray Charles’ composition ‘I Believe To My Soul’ paying tribute to both soul legends with equal measure. Martinez confidently steps into the role of Freddie King to present the minor-keyed lament ‘Same Old Blues,’ working the intensity of the grinding gospel infused standard written by Memphis songwriter Don Nix. One would think tackling a Muscle Shoals classic that was a hit for both Otis Redding and Wilson Pickett would be a daunting proposition, but Martinez digs deep into ‘You Left The Water Running,’ with ease, energizing the hot track featuring fine solos from saxophonist Ronnie Eades (Muscle Shoals Horns). He transforms the Canadian A.M. radio hit ‘Wildflower’ into a Neo-Soul showstopper, taking the simple poem written by Dave “The Cop” Richardson to new dramatic heights.

Martinez collaborated with Grammy-winning songwriter and guitarist Tony Goulas on the first of three original tunes, ‘This House,’ a four on the floor R&B dance groove about true love. Next The duo shares vocals on the Stax favorite from 1972, ‘Starting All Over Again,’ which is surely a highlight of the live shows. Martinez penned the hard driving shuffle ‘Eva Delle’ as the perfect vehicle to invite Rockin’ Dopsie Jr and his brother Anthony from the Zydeco Twisters to sit in on accordion and rubboard along with Lafayette’s sultan of slide Sonny Landreth for a genuine Swamp Pop Reverie.

Mac Daddy pours his heart into the first single from the album ‘Just Stay Gone,’ another fine composition from Goulas with soaring horn lines supporting the emotive vocals. He quickly lightens the mood by running down the lively Clarence Carter hit from 1969 ‘Snatching It Back,’ before lauding the virtues of his dear southern belle on the sentimental ballad ‘Moonlight & Magnolias.’ The soul party continues with a horn-driven cover of the Tyrone Davis #1 hit ‘Can I Change My Mind.’ Rising star of Louisiana Swamp Pop scene Charlene Howard joins Martinez for a roaring duet of ‘Don’t Pull Your Love,’ adding fire to the Sam & Dave arrangement that builds to a passionate climax.

Martinez then rounds out the baker’s dozen with ‘Marie,’ a lovely bonus track recorded with just vocal piano and strings, staying true to the Randy Newman original. “MacDaddy Mojeaux ” displays all the musical magic that comes out of Louisiana and is a gift to the world.