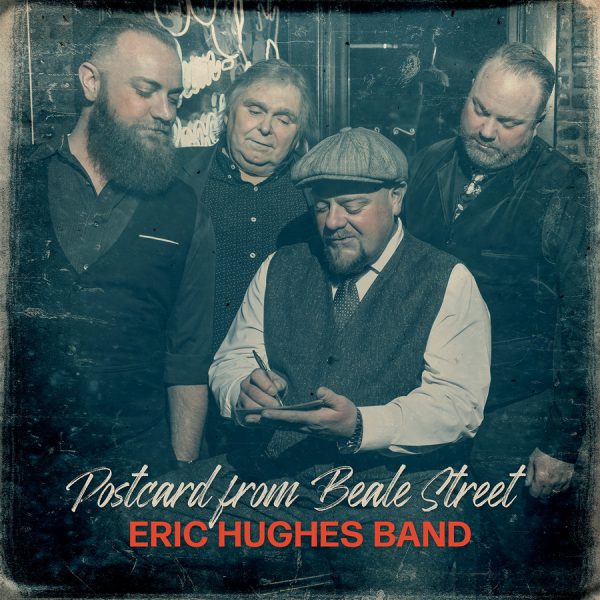 Eric Hughes exemplifies Beale Street today: steeped in blues but representing so much more; he has played over 4,000 shows on that famed avenue.

Hughes sees his role of Beale Street mainstay as a profound honor and sacred responsibility. Eric is a musician, storyteller, historian, tour guide and a rock-solid songwriter.

Through ‘Postcard From Beale Street’ he lets you hear what Memphis sounds like today, and what it sounded like yesterday. Eric’s songs here range in style from soul, indie, jug-band, ballad, rock, and – of course – blues. Eric and his band of skilled musicians (who toured and recorded with music legends such as Albert and BB King, Little Milton, Bobby “Blue” Bland, Jeff Beck, Buddy Miles and many more) are augmented by solid Memphis session players (with musical resumes that rival anyone).

‘Postcard From Beale Street’ represents the diverse influences that make Memphis music more than a thing of the past. Like Memphis, Eric’s music can’t be “pigeon-holed”; he’s not merely a blues artist.

This is a songwriting album: ear candy from some fine musicians. Each of these songs tell a story through lyrical imagery and crafty songwriting. All of these songs are ABOUT something, not just words to accompany music. The album begins with “Ain’t Whipped Yet”, which is Eric’s life story and motto – and gives a hint about how his nickname “Scrappie” came about. Eric’s lament, “Oh, Booze!” captures the essence of the Beale Street of the past – and present, with horns and arrangements that would have brought a smile to W.C. Handy himself and lyrics that tell a timeless story. With “He’s Just An Alley Cat” Eric shows that he and his band can rock out and get funky at the same time.

The song “Follow Your Stupid Little Dreams” urges people (especially fellow musicians) to do just what the title says- again in a musical style harking to the Beale Street of 100 years ago. “Homesick Angel” is Eric’s homage to his fighter-pilot grandfather, and “Fair Weather Friends” tells a timeless story in a very Memphis style. Anyone whose grandparents lived in a rural area can relate to “Blackberry Patch”, and those who long to see a loved one will identify with “Come See About Me”. Waiting For That Day” is the universal song of every working stiff and “It’s 4:20 Somewhere” tells of one way to cope with the frustrations of life.

‘Postcard From Beale Street’ is a homegrown production from start to finish, every song was written, played, and recorded in Memphis by Memphis musicians – produced, mixed, mastered and manufactured in Memphis.