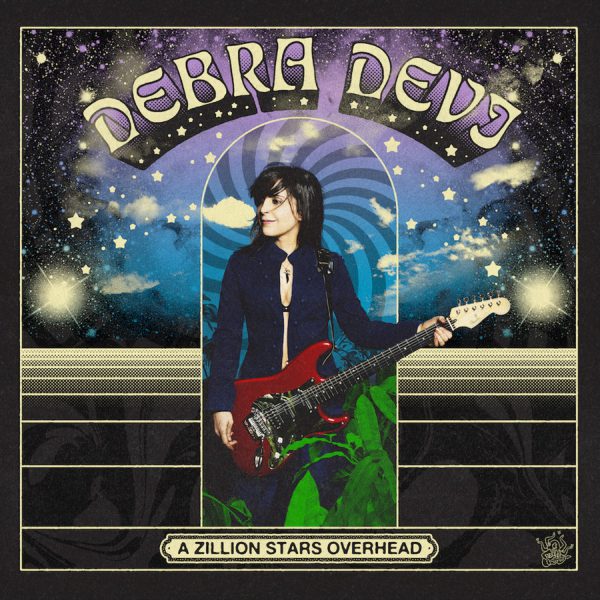 Debra Devi is a singer/guitarist who blends rock,  jam, and Americana influences into memorable songs flavored with her masterful guitar playing.

Carlsson and Devi met backstage at the Beacon after Mule’s NYE 2019 concert. “Jorgen and I got into a deep chat about production,” Devi explains, “and wound up talking about recording together. I was thrilled, as I consider him one of rock’s greatest bassists. Six weeks later we were at Kaleidoscope Sound in Union City NJ. I had just played guitar there on a record John Agnello was producing, so I asked him to run the session. We had a lot of fun!”

A Zillion Stars Overhead opens with “When It Comes Down (Jam),” a dreamy blues-rocker that morphs into a blistering psychedelic jam caught live in the studio. “We just took off,” Devi says, “Jorgen and John were so locked into each other that, as the guitarist, I felt like an equestrian balancing astride two galloping horses. It was a blast!” The trippy lyric video for “When It Comes Down (Jam)” includes behind-the-scenes studio footage and photos.

Track 2 is a rock/jam cover of Neil Young’s “The Needle and the Damage Done” with creamy slide, ethereal vocals and a searing guitar solo.

Track 3, “Stay,” is reminiscent of The Cult’s “She Sells Sanctuary” with layered guitars, a pounding disco/rock beat, and Devi’s soaring vocals. “Jorgen loves heavy rock, but he also loves ABBA,” Devi says, “so I thought he’d enjoy recording ‘Stay,’ which flirts with pop. He gave it the perfect driving Jah Wobble-type bass line.”

Track 4 is Massy’s “radio friendly” cut of “When It Comes Down.” The EP closes with Devi’s guitar instrumental “Canna Indica,” in DADGAD tuning.

Devi produced the EP and asked producer Rob Fraboni (Bob Dylan, Keith Richards) to add his proprietary RealFeel™ technology to the master. “It fills in ‘holes’ in digital sound to give it a velvety analog quality,” she explains.

A Zillion Stars Overhead will be released April 23 by Devi’s True Nature Records and distributed by Digital Music Marketing (DMM), which handles blues/rock/jam labels like Landslide Records and artists ranging from Derek Trucks to Tinsley Ellis.