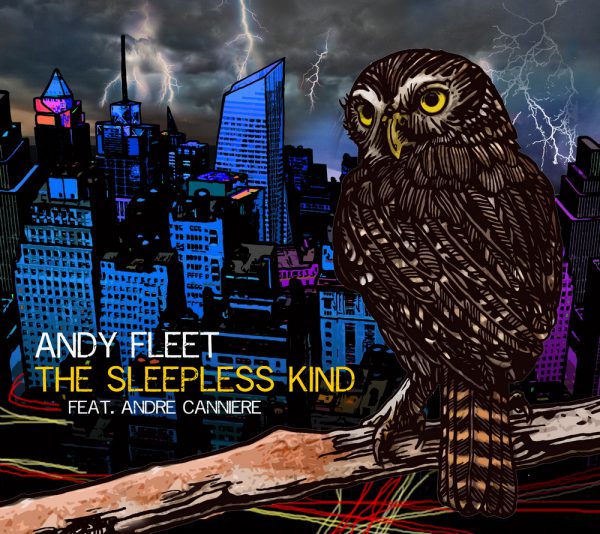 ‘The Sleepless Kind’ is the long overdue third studio album from Andy Fleet and once again features his trusted sideman Andre Canniere on trumpet showing just how much his playing has become an integral part of Andy’s nocturnal sound.

His debut album ‘The Night Falls Fast’, released in 2009, was a collection of ten beautifully crafted songs that told tales of friendship, loss, nocturnal infatuation and recounted long nights playing lounge piano.
At the album’s heart was the deeply affecting ‘Fifty Four Candles’. This was followed with Takin’ Aim in 2013 and was a big dark luscious sounding record from the horns laden New Orleans vibe of the opening track to the frighteningly honest and personal finale where Andy bares his soul and tells the tragic tale of the night his baby son died in ‘Brave Little Soldier’.

The Sleepless Kind is book-ended by the beautifully haunting title theme in two parts but at the album’s core is Through Closed Eyes, the story behind the owl perched overlooking the city on the conceptual album cover by Alban Low. Been There Drunk That does what it says on the tin whilst The Hobbyist and Stolen Years are moving tributes to a late friend and John Lennon respectively.

The album is an ode to the night and recounts tales of the sticky lights of Soho in the small hours, of the break-up blues and of troubled paranoid nights whilst the owl keeps watch…before he is gone…long gone.

Recorded at Ralph Salmins’ studio in Hertfordshire and featuring Zane Maertens on bass guitar and Joe Evans on drums along with a number of additional musicians, ‘The Sleepless Kind’ is a startlingly accomplished, cohesive and progressive work.