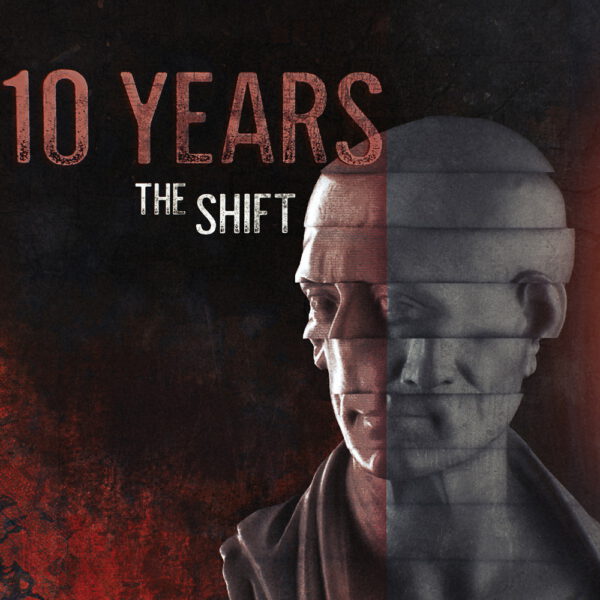 Embracing heightened vulnerability, elevated songcraft, and sonic adventurousness, the band continues to evolve forward. Singer Jesse Hasek shares, “We don’t ever try to recreate what we’ve done in the past.  We knew we had to challenge ourselves to see what we had in us. If it’s not stressful, you’re not challenging yourself to grow. From the beginning, music has always been therapy and an outlet. We let ourselves enjoy the process, be vulnerable, and talk about those emotions. We got back to why we love music with the maturity of where we’re at in our lives. We were able to harness that love of creating from a wiser and more developed perspective.”

For nearly two decades, 10 Years have quietly pushed themselves and modern rock towards evolution. Building a formidable catalog, the group’s gold-selling 2005 breakthrough The Autumn Effect yielded the hit “Wasteland,” which went gold, infiltrated the Billboard Hot 100, and clinched #1 at Active Rock Radio and #1 on the Billboard Alternative Songs Chart. They landed three Top 30 entries on the Billboard Top 200 with Division [2008], Feeding the Wolves [2010], and Minus the Machine [2012]. Most recently, 2017’s  (how to live) AS GHOSTS marked a reunion between Jesse, Brian, and Matt and achieved marked success. Not only did the album bow in the Top 5 of the US Top Hard Rock Albums Chart, but it also yielded the hit “Novacaine.” The single ascended to the Top 5 of the Billboard US Mainstream Rock Songs Chart and tallied 16 million Spotify streams, alongside 29 million streams across all dsp’s.  The cumulative total for all track streams from repertoire on (how to live) AS GHOSTS exceeds 51 million plays. Along the way, they sold out countless headline shows and toured with everyone from Korn, Deftones, and Stone Sour to Chris Cornell and Linkin Park.  This new recording is a collaboration with GRAMMY® Award-winning producer and Feeding the Wolves collaborator Howard Benson [My Chemical Romance, Halestorm, Papa Roach, Three Days Grace].

Hasek offers, “While in the studio last fall, we were looking at the state of the world as we wrote ‘The Shift’.  As a society, we’re so distracted that we’re not united. When the pandemic happened, it became so important to finally see the positivity of humanity. We’ve realized we’re all in this together. You can pick a side, but we’re sitting in the same realm.”  Guitarist Brian Vodinh adds, “Lyrically, it’s about the polarization of society and the human impact on the earth itself.  We were thinking about how humans can be a virus to the Earth.  There is something incredibly special about how we create. We go through hell facing all challenges head-on, but the final product is worth it. Simultaneously, it reflects the state of divisiveness in The World. Everything is so political. Everyone is angry at each other. We’re better when we come together.”  “After all of this time, 10 Years is a brotherhood,” Jesse concludes. “I’ve spent the better half of my life accomplishing what I never thought was possible with these guys. It’s been an unexplainable, crazy, and awesome journey since Brian first asked me to join the band on his 19th birthday. We’ve beat the odds and continue to live life. It bothers me when people don’t try to push themselves to enjoy what life has to offer. Life is beautiful, if you really go for it and try. It can show you beauty—and that’s what this band has shown me.”