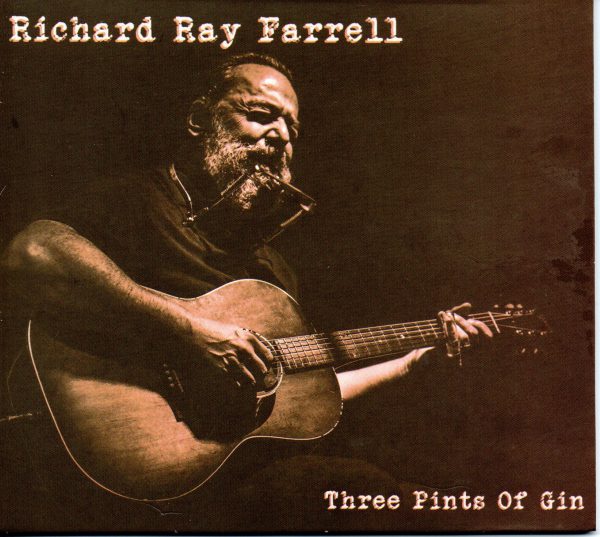 ‘Three Pints of Gin’ is the first new release from US bluesman, Richard Ray Farrell, in a few years now. Farrell is mostly based in Spain these days but this latest release was mastered , produced and recorded with no overdubs as a live album in the USA, where Farrell’s own roots lie. Always a truly excellent performer, here Farrell turns out a full sixteen-track album that features his wonderful, inspired acoustic picking and harp playing  alongside a gritty, edgy, raw delivery that works perfectly and really illustrates the guy’s sheer strength and quality.

In the past, Farrell has worked with others and his album, ‘Down Home Old School Country Blues’ recorded with Steve Guyger remains maybe one of his best, though I always have a personal preference for a later release, ‘I Sing the Blues Eclectic.’  That said, ‘Three Pints of Gin’ just might be the offering that beats the bunch with a superb display of fretwork virtuosity and some genuinely stirring lyricism that just lifts the entire project out of the ordinary and lifts it head and shoulders above the crowd. Farrell himself believes this may be his best to date and in truth it’s hard to disagree.

Tracks are mostly self-penned with a few exceptions where he covers Lonnie Johnson’s Lazy Woman Blues,  Fulton Allen’s Funny Feeling Blues,  and the old traditional blues standard He’s In The Jailhouse Now. Whatever he turns his hand to, Farrell masters and at times the picking is near-breathtaking with countless examples of absolute mastery and ease rippling throughout the release.