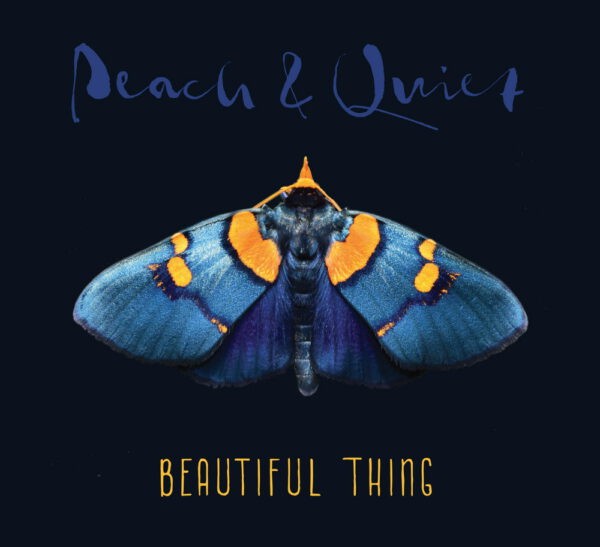 Two years ago the duo Peach & Quiet, aka Jonny Miller & Heather Read, reached out to the world from their log home on Canada’s West Coast with their debut album, ‘Just Beyond the Shine.’ In a few short months, that record topped the folk and roots music charts in North America and had airplay around the world. Reviewers raved, calling it “a basket of surprises’” ‘superb”, “sublime”, “utterly original”. The album received praise across Canada, the U.S., Britain and Europe, and hit four best of the year lists. One of their songs, ‘Flowers Grow’, was even translated into Chinese. Just Beyond the Shine was also named Featured Album of the Week on BBC Radio Scotland’s Iain Anderson Show.

Now, the duo is set to release their second album ‘Beautiful Thing’ in January 2023. This collection of 12 original songs has elements of Americana, blues, rock and overtones of 1970s psychedelic rock that came from Laurel Canyon. Beautiful Thing is produced & backed up with electric, pedal steel and slide guitar by Nashville-based string wizard Steve Dawson (Henhouse Studios) and features a line-up of star players – Chris Gestrin (keys), Jeremy Holmes (bass), and GaryCraig (drums).

As one reviewer said, this duo “sounds like they have been playing together for 30 years”. So it’s hard to believe that it was only in 2019 that Jonny and Heather found each other, emotionally, spiritually and musically. They quickly discovered the joy of singing, playing and writing together, with Heather’s clear alto a perfect foil to Jonny’s slightly gritty “character voice”.

Heather and Jonny were both born to play music. Heather’s dad was an active Hammond organ player well into his eighties and played gigs four nights a week for nearly 70 years, even opening for an upcoming singer called Tom Jones in his native Wales. Heather sang with him at legion halls when she was four. She took a long break from music to pursue a master’s degree and to work in the publishing industry, which she currently does by day. She moved to Victoria in 2013 and returned to her music by night, starting several local folk bands and songwriter circles.

Jonny grew up on the West Coast and was steeped in music from an early age. His mom was the first female radio engineer in Western Canada and worked at Co-op Radio in Vancouver. His dad is a reggae DJ in the U.S. and introduced Jonny to reggae and California rock as a very young child. Jonny remembers sleeping under a table at a Bob Marley sound check. He started earning a name as a singer-songwriter thirty years ago and has won Vancouver Island Music Awards and a People’s Choice award for his music video Home in the Victoria Film Festival.

Heather and Jonny have created a new album of magic together on their new labour of love, Beautiful Thing. Their way of announcing that even in these troubled times, there is hope, courage, and gratitude, that life in these times is in indeed “a beautiful thing”.

The cover art is an African Peach Moth, and was created to honor the loss of our dear friend, famed album designer
Michael Wrycraft, who designed our last album and was set to design this one too.