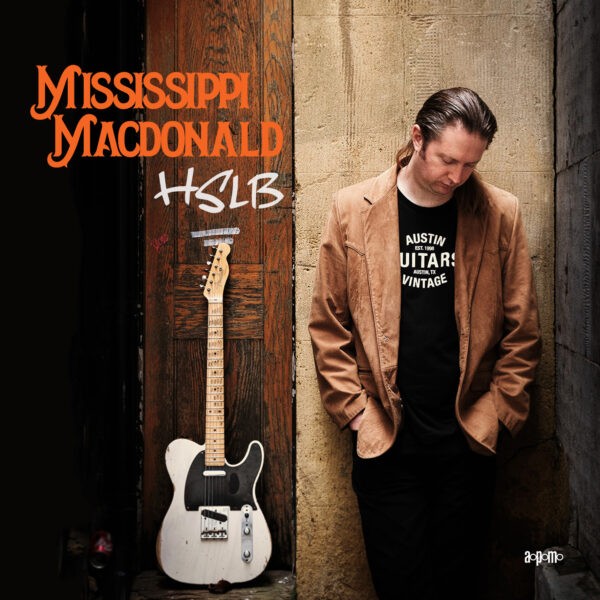 British musicians have long had a burning passion for American roots music and none more than threetime British Blues Award nominee, Mississippi MacDonald, who earned his moniker for displaying his love for the blues at an early age.

The guitarist/singer songwriter with a whiskey-soaked baritone doesn’t waste time on his latest album, ‘Heavy State Loving Blues,’ launching into a tight Chicago Blues rebuke of “would be” music fans on the horn driven opening number “Howlin’ Wolf,” emphasizing his point with sharp guitar leads.

The title track is a chunk of Hi Records Soul that could have come from the Al Green catalog. Acclaimed vocalist and Memphis scion Vaneese Thomas joins MacDonald for the fiery duet “Blind Leading The Blind,” trading barbs over a driving groove from the solid rhythm section of Elliot Boughen on bass and drummer “Texas” Joe McRoury. The excellent arrangement from Dearing comes into play on the spacious soul number “Heading South,” and the smooth burning “(I Ain’t Gonna) Lie No More,” as both feature tasteful horn lines and keyboards propping up MacDonald’s pleading vocals and gritty guitar solos.

The first cover song is a pure rundown of O.V Wright’s “I’ve Been Searching,” from his 1973 Memphis Unlimited album delivered as a loving tribute to MacDonald’s gospel soul hero. The emotional blues ballad “I’ll Understand,” finds him digging deep into his softer side. The country tune “Trouble Doing The Right Thing,” from Zack Logan is remade here as an easy-going blues ramble. The mysterious tome “The Devil Wants Repayment,” has a lazy bayou feel and a touch of voodoo charm. In the album notes MacDonald lists that he played a Fender Albert Collins Telecaster so naturally he was moved to write “Blues For Albert,” on which he professes the origin of his obsession and the devotion to the art as a blues benediction to close the set. Mississippi MacDonald continues to carry the torch as a next generation blues man on another strong album.

BIOGRAPHY
“It’s modern, it’s not musical archaeology,” says London-based soul-blues stylist Mississippi MacDonald of his music. “It celebrates a fantastic tradition. It’s soul-blues, and you’ve got to put your best into it.”MacDonald knows that tradition. He’s been to Al Green’s church and heard him preach. He’s been to Willie Mitchell’s Royal Studios in Memphis, where the great records on the Hi Label were recorded. He’s seen Jerry Lee Lewis kick over his piano stool. He’s met B.B. King and Pinetop Perkins, Otis Clay, and Sam Moore. Big Joe Turner told him to listen to Albert King. In 2008, he was a prime mover in finally getting a stone for the previously unmarked grave of soul legend O.V. Wright

But it’s with his own music that MacDonald hits most directly. Sure, he’s been to America to find the sources of his inspirations. That even got him his name. At school, he was the only kid anyone knew who had been to America, so was dubbed Mississippi. He’s received three British Blues Award nominations. He’s hit the top spot in the UK Independent Blues Broadcasters Association’s charts. He’s had the support of Paul Jones and Cerys Matthews on BBC Radio 2, and thumbs-up from Bluestown Music in The Netherlands and the Washington Blues Society.

Bluestown Music55 minutes ago
New Release: Nick Schnebelen – What Key Is Trouble In?