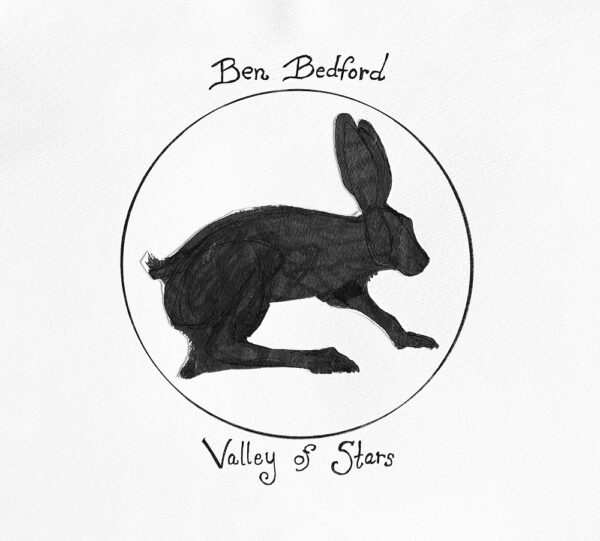 ‘Valley of Stars’ is a magical tale. It’s the fantastic adventure of Hare, and Ben Bedford‘s 6th studio album. Composed during a rough personal period in Ben’s life, it explores themes of joy/grief and connection/isolation often through nature imagery. Ben has woven a rich tapestry with music, story, and drawings (the album art is by Ben) and though smaller in scope than Watership Down by Richard Adams, Bedford aspires to a depth with this world and this album.

Bedford didn’t set out to write a concept album. In fact, all the tracks were written as individual vignettes. After completing 30 compositions during lockdown, he realized that there were threads connecting many of the tunes and that strung together in a certain order created a story arc that he hadn’t intended. He had written an adventure story, a sort of parable, with Hare as the protagonist.

The Story: Long ago, in the Valley of Stars, Hare went on an adventure to find his friends. He knew they were out there. He’d know them by their open door and light within. He leapt over hills and flowers, looking. From a distance, he saw wolves. They sang to the moon! Hare wasn’t in danger. The wolves were chasing a deer. But he felt frightened anyway. “The world is a wonderful but strange place,” Hare thought. In a darkflight he ran to the river. Soon it was morning. He ran in the sunshine. He watched the Starlings fly through the air. Then, he saw Leopard. He went and sat next to him. Leopard was sad. “Why are you sad?” asked Hare. “Because so many don’t seem to care and aren’t trying to make the world better” answered Leopard. Hare ran down the hillside as fast as he could to cheer Leopard up. But he ran so fast that he ran right into Bear’s forest. Bear was the king of the wood and greeted Hare proudly but kindly. Before he knew it, Hare was part of a court dance, spinning beneath the yellow leaves. He wanted to dance forever but he continued on. Soon, he met Adder. Adder was very frightened and he bit Hare. Before long, Hare felt a little sick and very tired. He fell asleep and dreamed strange dreams. When he woke, he kept walking, and met Weasel, then Pike, then Fox, then Red Kite. All wanted to eat him up! But Hare was smart and quick and he got away. Finally, when it was almost night, Hare smelled chimney-smoke and saw light through the open door of Momma Badger’s burrow. She invited Hare in. Hare was very happy. “A friend” he thought. That night he slept in her shelter, safe from the world outside the windows as snow began to fall.

The album was composed during a rough period for Bedford. During the lockdown in 2020, he was divorcing, dealing with major depression and a flare up of his Obsessive Compulsive Disorder, and living alone in rural Illinois with his cat, Darwin, isolated for months from direct human contact. He began to process what he was going through but found writing directly about his life difficult. “It’s an album very much about grappling with grief, trying to move forward and find joy while also feeling vulnerable and anxious”, says Bedford. “Hare is trying to find light in dark, friendship in isolation. He’s trying to face his fears and accept reality. Early in the pandemic, there was a lot of uncertainty. It was scary out there. And on top of that I was going through a lot of personal stuff. I found it easier to process by writing about it obliquely. In a nutshell, I’m Hare, trying to find my way, find joy, while other characters like Weasel or Pike, might represent danger and my fears. Leopard is another manifestation of myself dealing with grief and listlessness. Adder could be fear of death, or fear of the unknown. Badger might represent safety and friendship but with the understanding that one has to go back out into the world eventually. And I did want to go back out into the world, but at that time, I couldn’t. Many days, I could hardly get out of bed. So, I wrote an album with Hare doing all that. Hare is me, trying to make sense of the world as wonderful and scary as it is. I wanted to go back out and find connection, beauty, joy, but the world also frightened me. So, I wrote this album with Hare doing what I wanted to do. Hare is an idealized aspirational version of me, in a way. Many of us felt isolated during the pandemic. This is simply my attempt to deal with that.”

Musically, this is Bedford’s most eclectic work, to date. Many of the tracks employ odd time signatures and chord voicings more often heard in Early Music, Baroque, and Jazz. To achieve the deep lush sound of the album, he enlisted the help of good friends.

All written by Ben Bedford