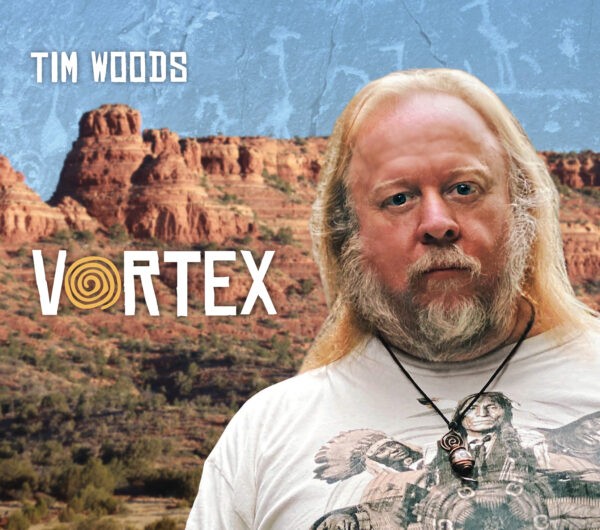 Originating in the mid-1960s among British and American musicians, the sound of psychedelic rock, art rock and progressive rock were based in folk, jazz, and blues, striving to push the boundaries of standard song forms and leading to the development of concept albums.

Popular bands of the genre such as Pink Floyd, Genesis, Jethro Tull, Jefferson Airplane, and the Grateful Dead kept their ties to the blues close throughout their heyday. For more than three decades, singer and guitarist Tim Woods‘ career as a solo artist and leader of the Woods Family Band has taken him on a long and storied journey that includes forays into folk, blues, rock, and soul.

Following up on the success of his second album, “Human Race,” released in February of 2018, Woods expands on the unmistakable sound and style and deeper message of love, peace, and kindness to Mother Earth.
Inspired by his recent visit to the natural wonders of Sedona, Arizona he penned this new collection, “Vortex.”

Woods begins with an introduction to the concept album by professing his willingness to embrace love on the easy rocking opener ‘Ready,’ preparing the listener for what is to come with rumbling drums and roaring guitars. The title track, ‘Vortex,’ finds Woods as a man gob smacked by the power and beauty of wild places and what he calls “Sacred Ground,” and details how visiting these wonders of the world left him conflicted and bemused, leading him to put those thoughts into musical context of a dramatic rock epic.

The mood takes a funky break on the playful 70’s groove rock tune ‘Some Of Your Love’ with Woods doing his best Godfather of Soul moves. We then head back to the country for the introspective midwestern rocker ‘Sometimes,’ followed by the progressive rock inspired instrumental ‘Sage.’

Woods apes a bit akin to Joe Walsh on the happy-go-lucky shuffle ‘I Don’t Know Yet’ and asks for forgiveness with his pleading vocal and soaring guitar on the ballad ‘Take Me Away.’ Paul Hornsby, best known for producing gold and platinum records for artists including the Charlie Daniels Band and The Marshall Tucker Band, lent his skills at the piano for the contemplative soundscape ‘Destination Unknown.’

The rambling roadhouse blues, ‘This Mess,’ encourages us all to get our hands dirty doing the work to make things right in the world and help someone in need. Woods closes his album with the environmental advocacy anthem ‘Water Is Life,’ a sweet acoustic driven progressive pop ballad with hints of The Beatles, standing out as a plea for everyone to do the right thing and preserve the world for our children; once upon a time an idea without controversy and now it feels like rock ‘n’ roll rebellion.