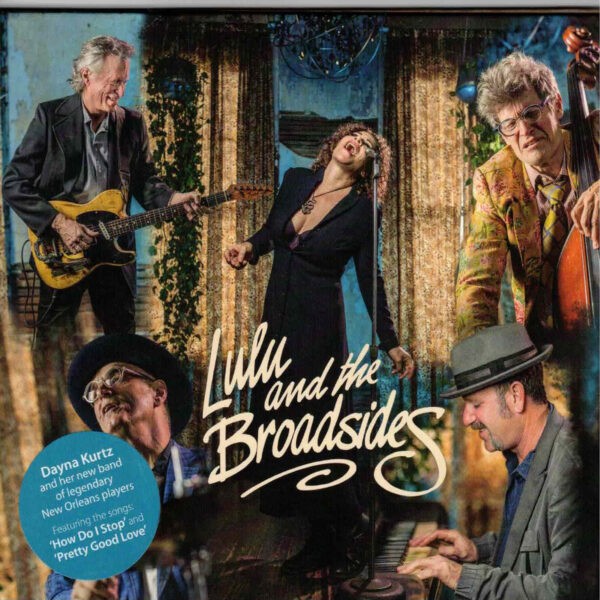 Lulu and the Broadsides (= Dayna Kurtz and her New Orleans Band)

Dayna Kurtz has found recognition around the world as as serious singer/songwriter lending her low, dark  voice to mostly serious songs about the trials and tribulations of life. In 2013 she found herself a new home in New Orleans, a city whose music is for dancing. So Dayna came up with her alter ego Lulu, whose repertoire aims at just that: dancing!

That’s exactly what the eleven songs of this enchanting album will make you do; If your body refuses to move to any of these tracks, it definitely needs checking. Listeners will be hopping about to 4 well-chosen obscure R & B covers plus a staggering remake of Iggy Pop’s I Need Somebody.

That leaves 6 self-penned numbers that fit seamlessly and what a feat that is! Her lustful, seductive vocals are supported by The Broadsides, the cream of the crops of New Orleans musicians who honed their chops with the greatest stars from The Big Easy. Among them is, of course, her trusted sidekick Robert Maché on various guitars.The extraordinary James Singleton is outstanding on funky bass.

Lulu presents her calling card straightaway in the first track, the swinging and juicy R & B gem That’s A Pretty Good Love, in which a thumping bass drives the enthusiastic interaction between singer and background choir to great heights and then she doesn’t let go in the seductive A-grade.

After all this tailfeather shaking it’s time to slowdance with your baby on the beautiful self-penned soul ballad How Do I stop, in which she follows in the footsteps of Otis and Aretha. In the slow,haunting Iggy Pop cover I Need Somebody Dayna/ Lulu sings her heart out and Robert Maché delivers a scorching solo.

The naughty Ice Cream Man features a cheerful barroom piano. She is surely struttin her stuff in the feisty Razorburn Blues with a wonderful organ. She then takes her foot off the accelerator in the dark and accusing You’re Trouble with James Singleton again excelling on bass.

Dayna’s own Bigger In Texas is another naughty one with exceptionally funny lyrics; it will set the couples swaying on the dancefloor. The upbeat Take My Advice (don’t fall for me) again features a cheerful piano, a surprise guest in a Hawaiian lap steel and  another devastating guitar solo by Robert Maché.

She sends us home from this sizzling dance fiesta with two slowburners and as its closing track the enchantingly sung Magical Spell; which is exactly what Dayna / Lulu has cast upon us.

Dayna’s infectious dance album is undoubtedly the biggest surprise of the year.