Too Slim And The Taildraggers – Brace Yourself! 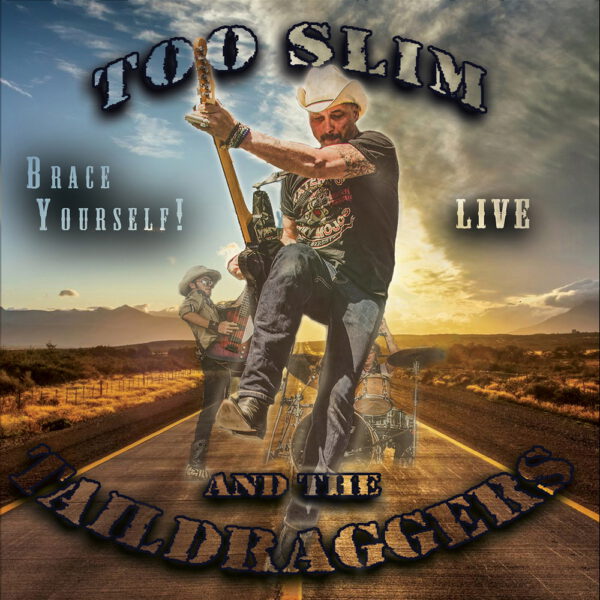 ‘Brace Yourself’, the new live album from Too Slim and the Taildraggers, is a blistering, high energy live set that captures the unique raw power this band exudes in a live performance setting. Recorded at Ohme Gardens in Wenatchee WA, BRACE YOURSELF shows the band’s true force and versatility as they incorporate their many influences into their all-original compositions.

The first single, “Cowboy Boot”, dropping July 8, 2022, shows Slim and the band at their Blues-Rocking best, giving a nod to Classic Rock influences as Slim sings of being “way past thrity.. with nothin’ to show for my ramblin’ life but a bunch of grey hairs and an achin’ liver, and a million promises I couldn’t deliver” as the stash of money he keeps in his cowboy boot has finally run out.

Songs like “Mississippi Moon”, “Fortune Teller”, “Cowboy Boot” and “Devil in a Doublewide” display a mix of Classic Rock, Blues Rock and Americana influences. “Blood Moon” and “Twisted Rail” conjure up images of Robin Trower and Jimi Hendrix. “When Whiskey Was My Friend” could easily have been a track on a ZZ Top album circa 1976. “Letter” and “Good Guys Win” are modern nods to Chuck Berry with a hint of Psychobilly. “Free Your Mind” has a feel of early electric Bob Dylan and “My Body” and “Givers and Takers” have an ethereal quality of late 60’s rock. All the songs also have an obvious tip of the hat to early electric Blues and Blues Rock. Brace Yourself for a hell of a ride!!!!!

Too Slim And The TaildraggersVizzTone Label Group