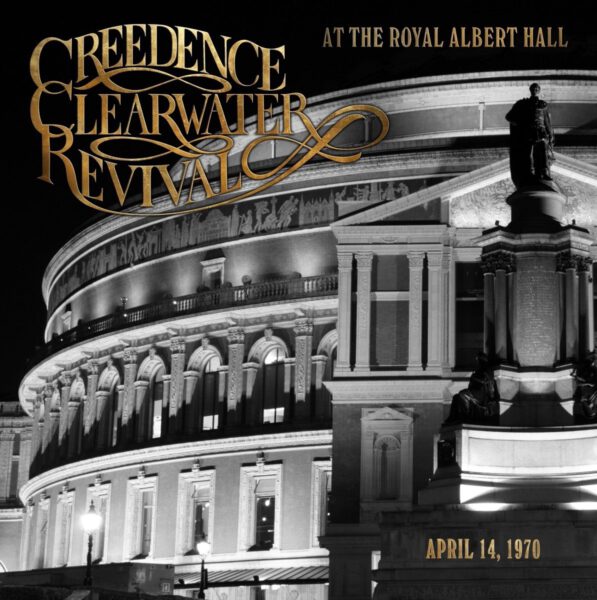 The audio for this release has been restored and mixed by Giles Martin and engineer Sam Okell. The album will be released alongside the documentary concert film Travelin’ Band: Creedence Clearwater Revival at the Royal Albert Hall, narrated by Jeff Bridges and directed by Bob Smeaton (he directed The Beatles Anthology, you may remember). The film takes viewers from the band’s earliest years together in El Cerrito, CA through their meteoric rise to fame. Featuring a wealth of unseen footage, Travelin’ Band culminates with the band’s show at the Royal Albert Hall—marking the only concert footage of the original CCR lineup to be released in its entirety.

The Royal Albert Hall shows were on 14 & 15 April 1970 – just days after the Beatles announced their breakup – and were part of the four-piece’s first European tour – an eight-show run that included stops in Holland, Germany, France, and Denmark. The group were at the height of their powers, having enjoyed five top 10 singles in America in the previous year along with a trio of top 10 albums (Bayou Country, Green River, Willy and the Poor Boys). They’d played to over a million people across the US, including at the Woodstock Festival and a triumphant hometown show at Oakland Coliseum early in 1970. Confusingly, a decade later in 1980, Fantasy Records released a live album by the band, titled The Royal Albert Hall Concert. However it was quickly discovered that the audio was, in fact, from the aforementioned Oakland Coliseum show. The label did rush to sticker the album to correct the error – and properly renamed the January 1970 performance as The Concert for later production runs – but it was a messy episode. Actual footage and audio from the Royal Albert Hall show has never been issued, until now.

The box set is exclusive to Craft Recordings’ websites in the UK and in the USA.

Creedence Clearwater Revival at the Royal Albert Hall is released on CD, vinyl and cassette on 16 September 2022, via Craft Recordings. However the box set doesn’t ship until 18 November. The documentary film will ‘rollout’ internationally on 16 September although there’s no details at present as to how that will happen.