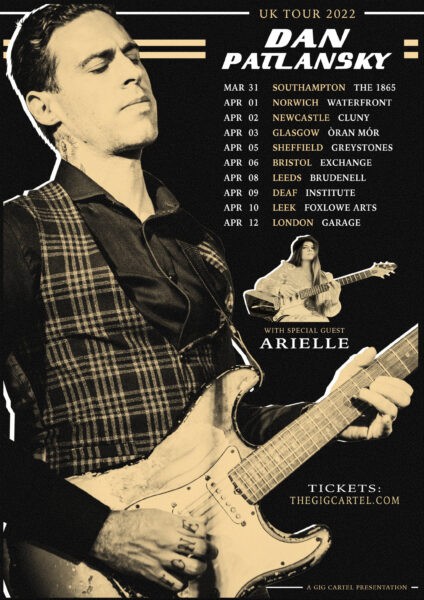 Special guest Arielle is a 21st century classic rock artist, having opened for Joe Bonamassa, Vince Gill, Eric Johnson, Greg Allman, and many others. Arielle released her own signature guitar with Brian May Guitars in March 2021. Her ninth studio album, ‘Analog Girl in a Digital World’ is out now.

This is the first tour Patlansky will undertake since his “Perfection Kills UK tour” in March 2018. Since the release of his ‘Perfection Kills’, Patlansky has been constantly writing new songs for his forthcoming album released in early 2022.

“I began recording the new record mid 2019 in my hometown of Pretoria, South Africa,” says Patlansky. “I was unhappy with the result and recorded most of the album end of 2019. Covid 19 put the brakes on any touring and release options for 2020. This gave me the opportunity to really refine the album, with a rewrite of a few songs, and re-record of a few tracks in early 2021.“